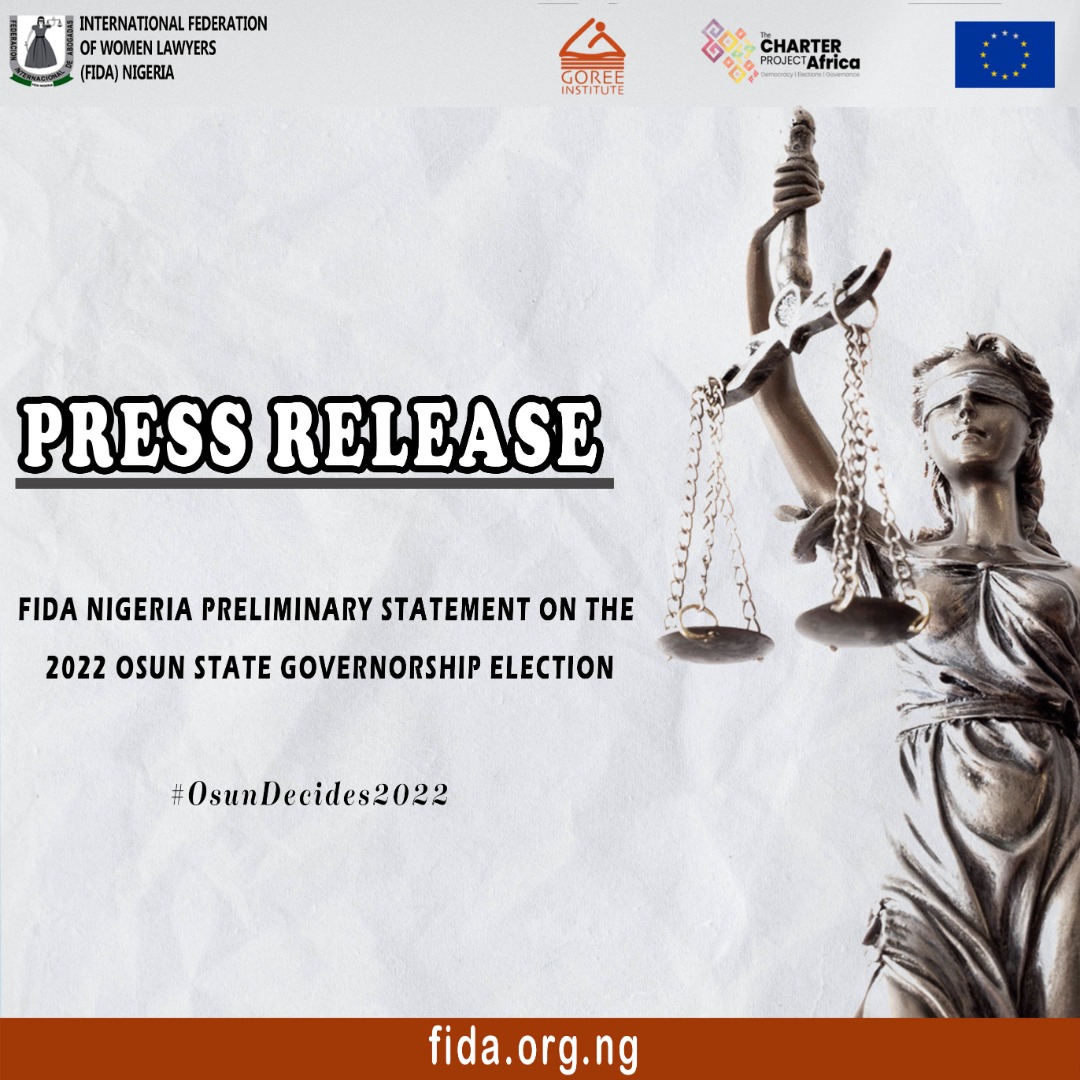 FIDA Nigeria through her situation room situated in Oshogbo and Abuja respectively observed the participation of women and persons with disabilities at the Osun State Governorship Election held on Saturday 16th July 2022 through trained citizen observers deployed across the Local Government Areas of Osun State.

2.0 Methodology
FIDA Nigeria with support from Goree Institute under the Charter Africa Project has tracked pre-election incidents ahead of the Osun Governorship Election which was disseminated to the public via our pre-election statement released on Thursday 14th July 2022. We have deployed our monitoring tool via our citizen observers which will be used in documenting election incidences promoting violence against women and persons with disabilities at the polls. Other information relating to election incidents are obtained from credible media sources and civil society actors respectively. FIDA Nigeria continues to closely watch the process across the thirty (30) Local Government Areas of the State until it is concluded by the Independent National Electoral Commission (INEC). The following issues are highlighted as part of our preliminary report:

2.4. Functionality of the Bimodal Voters Accreditation System:
FIDA Nigeria has observed that across most polling units within our purview, the bimodal voter’s accreditation system was largely functional which aided accreditation and the voting process. However, we observed some few discrepancies of where the BVAS were not functional. At polling unit 7, ward 10, Odo-Otin LGA, the BVAS was observed to have developed fault and was not rectified as at 12 pm. About 64% of the covering polling units were able to resolve the BVAS issue experienced, while 28% are yet to report resolve as at the time of this reports.

2.6. Vote Trading: FIDA Nigeria observed disturbing incidents of vote trading across the state especially as our observers reported that about 16% of the polling units were to have witnessed voting inducements. For instance, at polling unit 2, ward 3, Isokan LGA, Incidence of vote buying were observed by leading political parties between N3000 to N5000 respectively. At PU005, Ward 08 St Peter’s School Sekona, Ede South LGA, Our observers reported incidence of vote buying. Similarly at PU 02, ward 002, Ayedade LGA, and Polling Unit 12, Ward 12, Ife North LGA, voters were induced with the sum of N2, 000 –N5, 000.

2.7. Conclusion
FIDA Nigeria will continue to observe the elections and later issue her post-election statement to detail more on the overall participation of women and persons with disabilities.
God bless the Federal Republic of Nigeria.