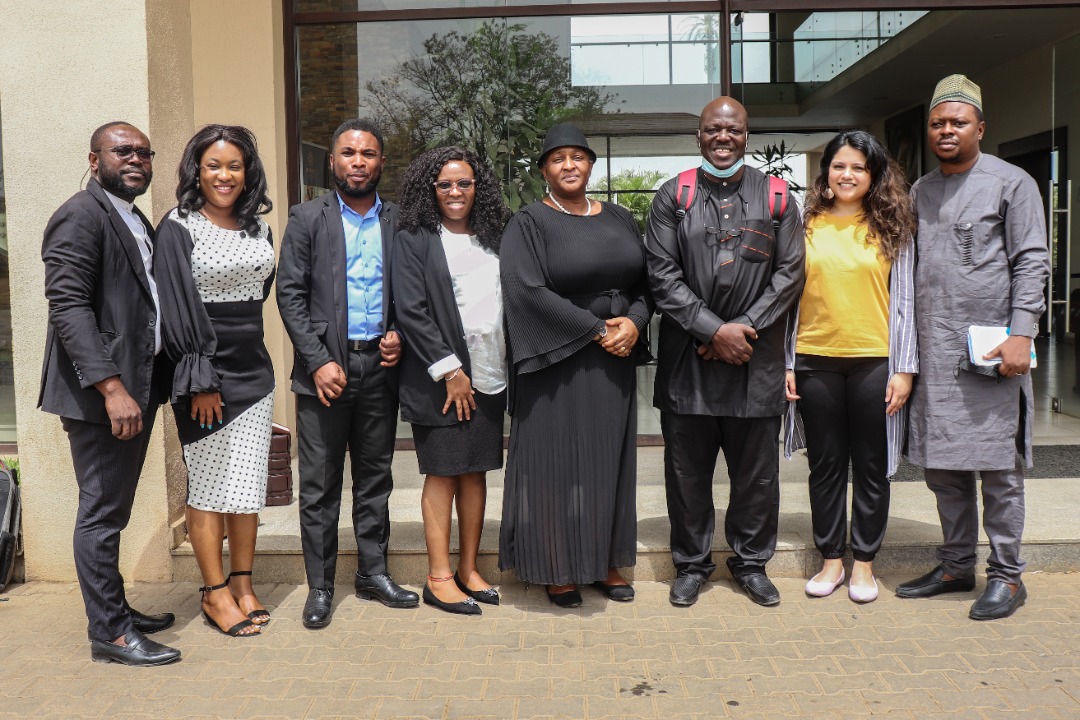 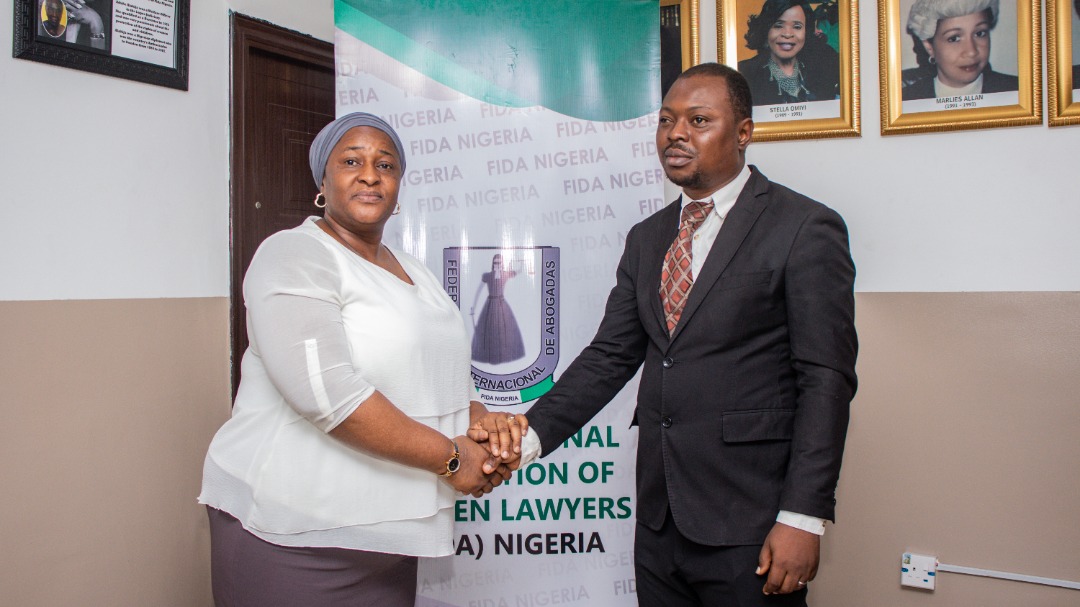 The International Federation of Women Lawyers (FIDA) Nigeria has appointed Mr. Fikih Obaro as its National Programme Manager. He will assume duty on the 14th of February and will come into the role with over a decade of experience across the Development and Corporate sectors.

“Prior to FIDA Nigeria, Mr. Fikih Obaro worked with CLEEN Foundation where he spearheaded several projects with quantifiable results. He was the Project Coordinator & Lead, Anti-Human Trafficking on Monitoring the implementation of the tripartite Agreement Between the United States of America, Baliwick of Jersey, and the Federal Government of Nigeria on the Disposition & Repatriation of $311million dollars currently utilized at three infrastructural locations in Nigeria. He managed the UNWomen supported project titled “Prevention of Human Trafficking and Forced Migration on Women & Girls in Lagos & Edo States of Nigeria”

“He led the campaign for the implementation of a missing persons register in Nigeria under a transnational Justice Project supported by the University of Los Angeles, United States of America, America Academy for the Advancement of Science (AAAS) & the University of Toronto, Canada where he served as a Research Assistant amongst other interventions.
As Program Manager, He will energetically & resourcefully lead our interventions in line with the mission, vision and strategic goals of our organization


FIDA Nigeria was established in 1964 with its main objectives are to establish friendly international relations on a basis of equality and mutual respect for all peoples, preserve the rights and welfare of women and children, realizing that the happiness of the home and the strength of the society is dependent on their wellbeing and proffer advice to Government in all cases of disregard relating to women and children. 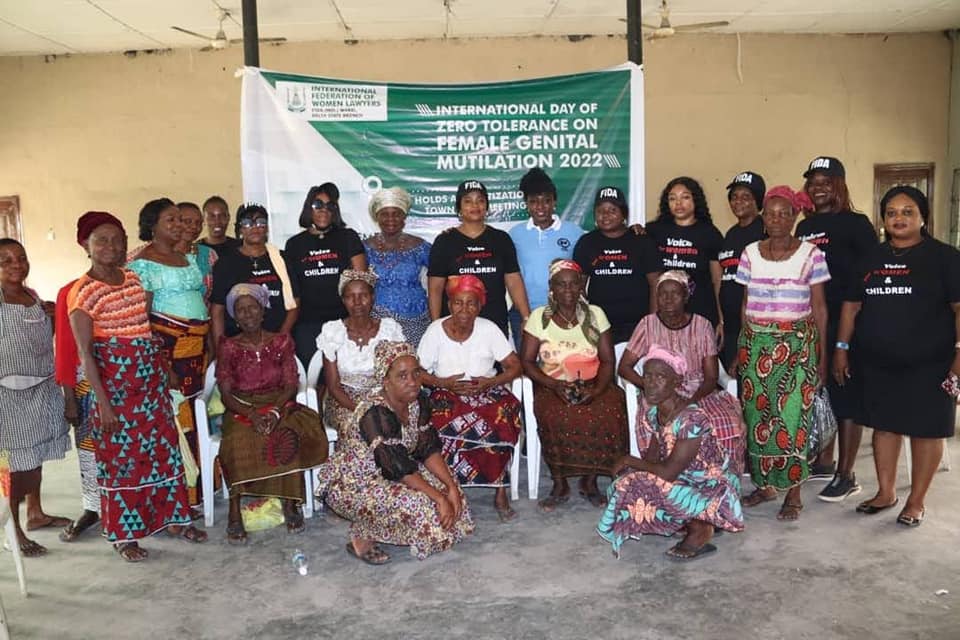 
The Zonal Director of Ministry of Justice, Warri, Zino Aikpokpo- Martins sensitized the women on the legal implications of such traditional practices.
It was an interactive and interesting session, and the community women were glad to receive FIDA. 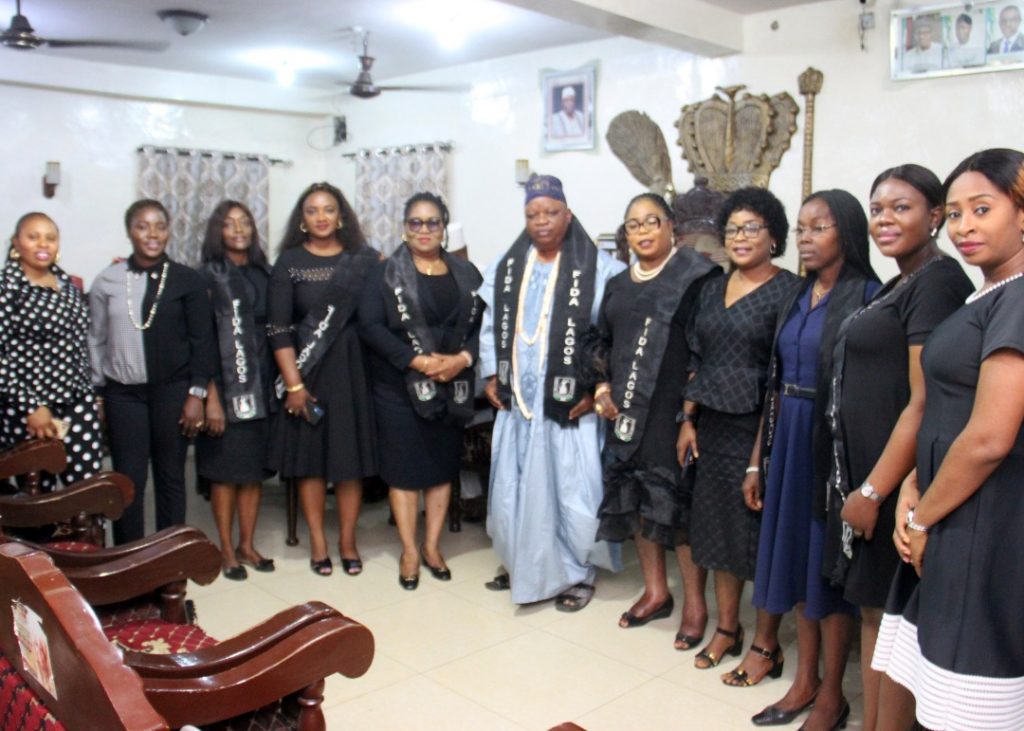 As part of its activities to celebrate the United Nations International Day of Zero Tolerance to Female Genital Mutilation on the 6th of February 2022, the International Federation of Women Lawyers (FIDA) Nigeria, Lagos State Branch paid a courtesy visit to His Royal Majesty, Oba (Alhaji) Kabiru Kolawole Alani Adelaja Agbabiaka, the Osolo of Isolo in Lagos State.

Led by its Chairperson, Mrs. Chinwe Efobi, the FIDA Lagos team informed the monarch that the purpose of the visit was to sensitise the Kaabiyesi and his Royal Council members on the forthcoming Town Hall meeting to mark this special day.

Female Genital Mutilation (FGM) is a traditional practice that is widespread in many Nigerian and African communities and has led to the death and disability of many of its victims. 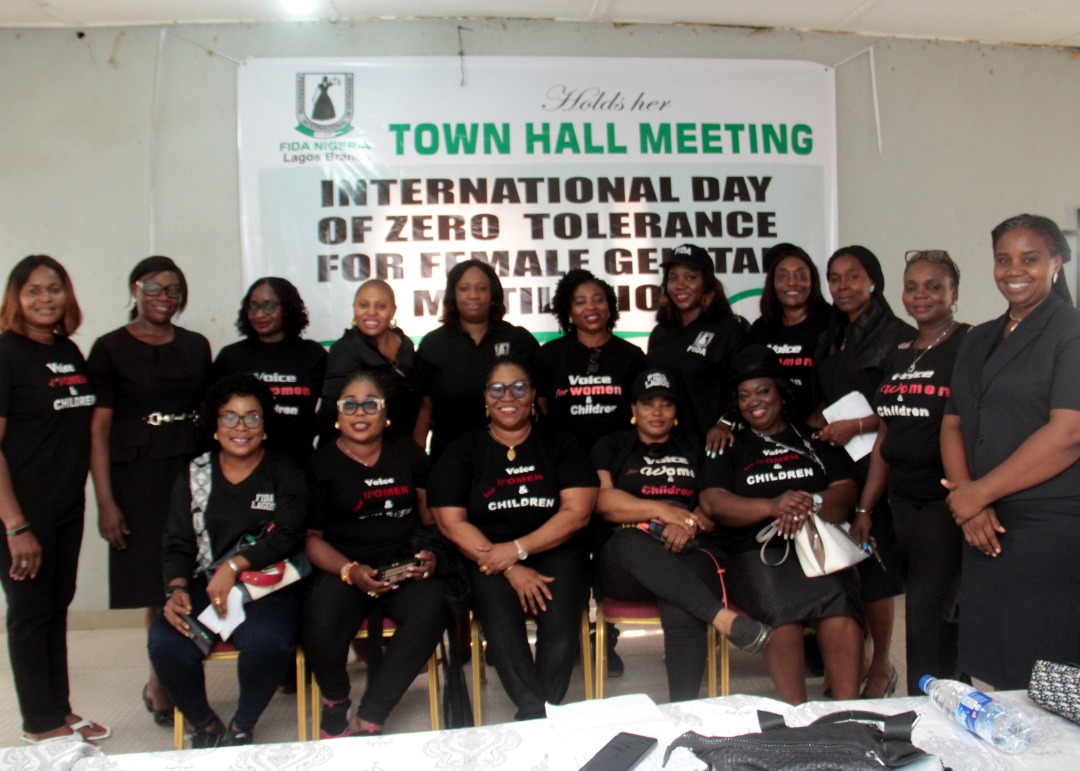 FIDA Nigeria, Lagos State branch held her Townhall meeting which was a follow-up on the Advocacy/ Courtesy visit to the palace of Osolo of Isolo on Wednesday, 2nd of February 2022.

The Chairperson, Mrs Chinwe Efobi gave a brief introduction of the significance of the day. The meeting was well attended. The Osolo of Isolo and his chiefs – in – council, iyalojas and representatives of different markets, the Youths, NURTW, palace guards etc. were all present.

A paper presentation on this year’s theme by Fidan Ifeyinwa Okpalaku and interpreted in Yoruba language by Ruth Akinwande to the participants. The Oba also spoke in Yoruba language on the harmful effects of the barbaric and harmful traditional practice and admonished his subjects to desist from such practices and also encouraged them to speak out when such is going on.

Fliers were shared to disseminate more information on the purpose of the town hall meeting. It was an interactive, impactful and successful meeting with many members of the International Federation of Women Lawyers (FIDA) Lagos State Branch present. 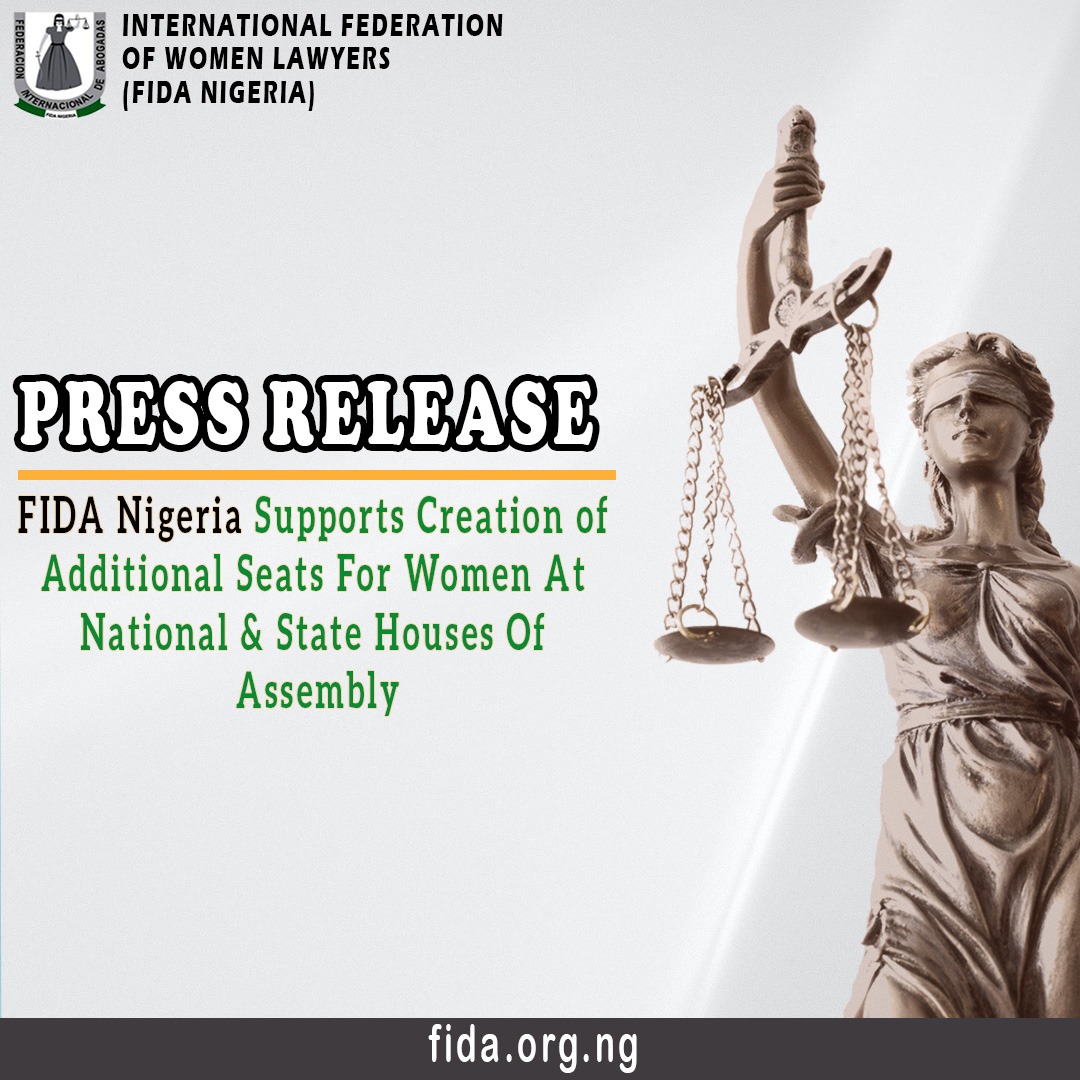 
The International Federation of Women Lawyers (FIDA) Nigeria commends the recommendation by the Joint Senate and House Committees on Constitution review to create one hundred & eleven (111) additional legislative seats in the National Assembly and two additional seats per senatorial zone in state Houses of Assembly and the Federal Capital Territory which will be solely occupied by women beginning from the next general election in 2023.

FIDA recognizes these recommendations from the committee as a step in the right direction even though it falls short of the 35% affirmation demand obtainable in major Democracies. We have observed that from the advent of democracy in Nigeria, Women’s participation in elective positions has been minimal which has significant and multi-dimensional implications for the democratic project in Nigeria and her continuing quest for gender equality in Africa’s biggest economy.

We note this recommendation to be a major improvement from the present scenario where only 21 out of 469 seats in the present National Assembly are occupied by women. This has placed the Nation as the worst performer in the West African Region when looking at the representation of women in parliament, and the second-worst after Eritrea in the whole of the African Continent. Furthermore, at the sub-national level, only 45 seats of the 990 seats in all State Houses of Assemblies are occupied by women which constitute about 4.5% of elected representatives.

As the 2023 general elections get closer, we kindly call on the National and State Houses of Assembly to ratify the committee’s recommendation and for the President to grant assent towards improving the inclusivity of vulnerable and marginalized groups including women in the political process & Governance in Nigeria.

FIDA Nigeria was established in 1964 with main objectives to establish friendly international relations on a basis of equality and mutual respect for all peoples, preserve the rights and welfare of women and children, realising that the happiness of the home and the strength of the society is dependent on their wellbeing and proffer advice to Government in all cases of disregard relating to women and children. 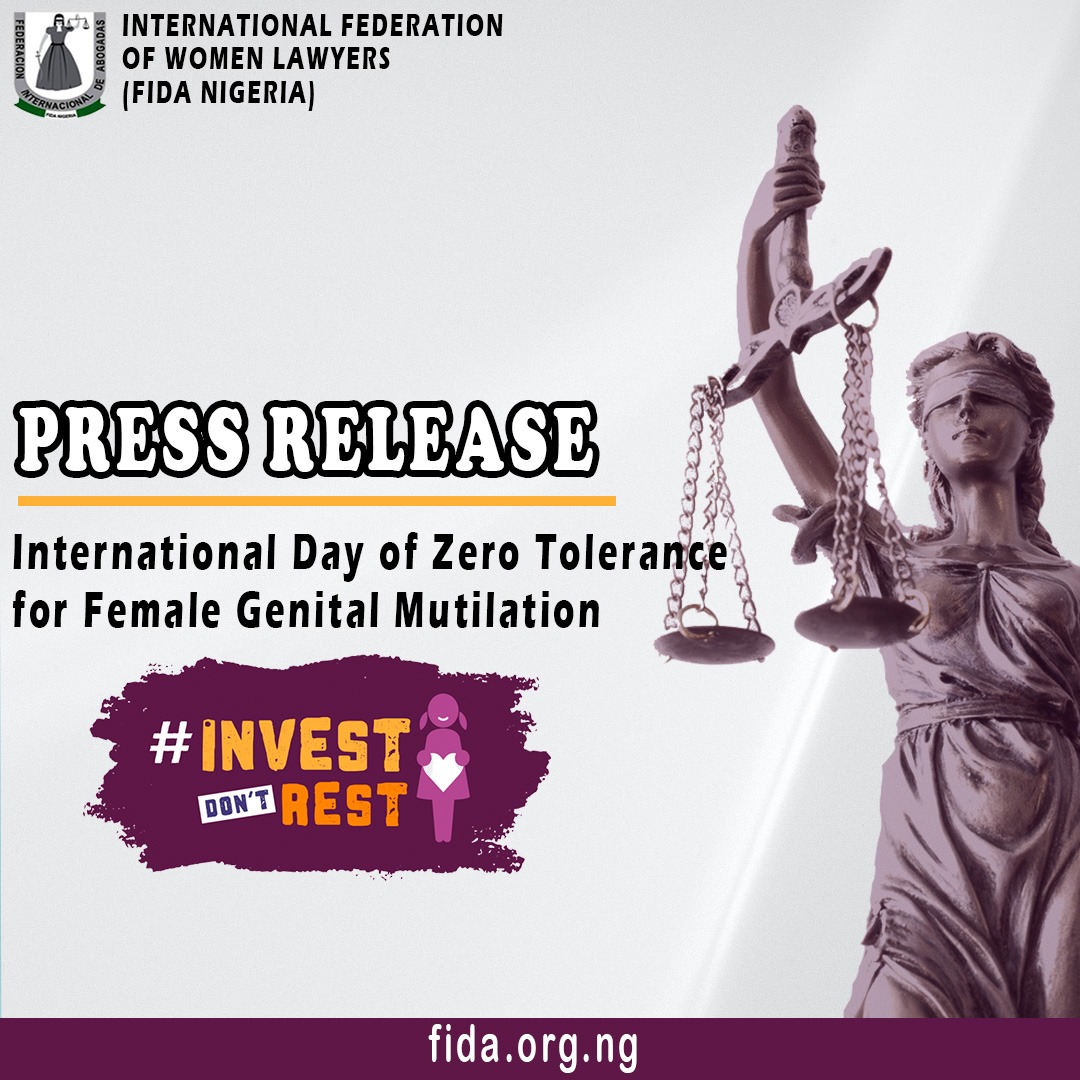 FGM is still widely practiced in different parts of the country because of varied erroneous tribal/ traditional beliefs and practices.
It is practiced based on superstitious beliefs which range from the preservation of chastity and family honor, to ensuring perceived purification and hygiene, or for the protection of virginity and prevention of promiscuity; not to mention enhancing fertility and increasing matrimonial opportunities in women.
Other fears for which its use is said to protect include – to prevent mother and child from dying during childbirth; while in some communities it enables one to inherit property if circumcised
These totally wrong beliefs (though unproven as correct) remain strongly engraved in the minds of the people and are still widely practiced in Nigeria with young girls being coerced and pressured by family members for forced circumcision. This is FGM and it is a GBV!
As the world marks the International Day for Zero Tolerance to Female Genital Mutilation, FIDA Nigeria points out the fact that these practices and beliefs which still persist must be stopped.
FIDA being steadfast in the fight to prevent and end this needless and ugly trend in Nigeria calls on all to work collectively with us to stop these myths and misinformation still very prevalent in the society
In Nigeria, 25 per cent of women and girls, aged 15-49, have undergone some form of FGM (UNFPA). This most unfortunate practice of mutilating the girl child has subjected many to physical, emotional, and psychological trauma.
Note that Section 11 of the Childs Right Act 2013 protects the right to dignity of the child, while Section 6 of the Violence Against Persons prohibition (VAPP) Act 2015, expressly prohibits FGM
With this year’s theme focused on Accelerating Investment to End Female Genital Mutilation, we encourage everyone to join this fight where we also aggressively invest in different programmes to provide support services responding to those at risk and vulnerable to such practices.
We must enforce the applicable laws while fortifying institutional capacity to address and eradicate FGM (female genital mutilation)

Girls must be informed and empowered to act fast protecting themselves; and must also be able to easily access health care and protective service when in urgent need
Additionally other activities lined up in commemoration of this day by FIDA Nigeria across her 43 branches include to carry out Advocacy visits to community leaders and persons of influence in different communities, hold town hall meetings with traditional and faith-based leaders to sensitize them on key issues and the harmful nature and dangers of FGM.
We shall continue to do all within our mandate to fight against Female Genital Mutilation and shall work to ensure that women and children can live freely in society without fear of FGM and GBV
FIDA NIGERIA stands against Female Genital Mutilation; let us Accelerate Investment to End Female Genital Mutilation!