THE EMBASSY OF SWITZERLAND

Mitigation of Gender Based Violence through the Training of Community Paralegals in the Federal Capital Territory: The project will be implemented in two communities each of Abuja Municipal Area Council, Bwari and Kuje area councils. It is designed to train 10 women in each of the aforementioned area councils on basic human rights principles and the protection offered to women and girls in the VAPP Act.

As part of efforts to promote and protect the rights of Women and Girls in Nigeria, FIDA Nigeria, with funding from @ActionAidNigeria through the Women’s Voice and Leadership Nigeria Project, announces the commencement of a 5-year Project in the Federal Capital Territory, Abuja with focus on capacity building of networks, groups, associations and movements of women’s organization to create cultural, political and legislative change with a view to achieving increased effectiveness of sub-national, national and platform, networks and alliances to affect policy, legal and social change in Nigeria. This project is fully supported by Global Affairs Canada.@CanHCNigeria

FIDA Nigeria is a selected UN Women implementing partner on the EU-UN Spotlight Initiative. The Spotlight Initiative is a global, multi-year partnership between the European Union and the United Nations (EU-UN) Agencies to eliminate all forms of violence against women and girls. The Initiative seeks to respond to all forms of violence against women and girls, with a particular focus on sexual and gender-based violence and harmful practices, by beaming a spotlight on these existential issues, while placing it at the centre of a collective drive for gender equality and women’s empowerment, in line with the 2030 Agenda for Sustainable Development.

FIDA Nigeria has been assigned to work on Outcome 1: Legislative and policy frameworks, based on evidence and in line with international human rights standards, on all forms of violence against women and girls and harmful practices are in place and translated into plans; and Outcome 2: National and sub-national systems and institutions plan, fund and deliver evidence-based programmes that prevent and respond to violence against women and girls and harmful practices, including in other sectors in the FCT, Sokoto, Ebonyi, Adamawa, Lagos and Cross Rivers states. 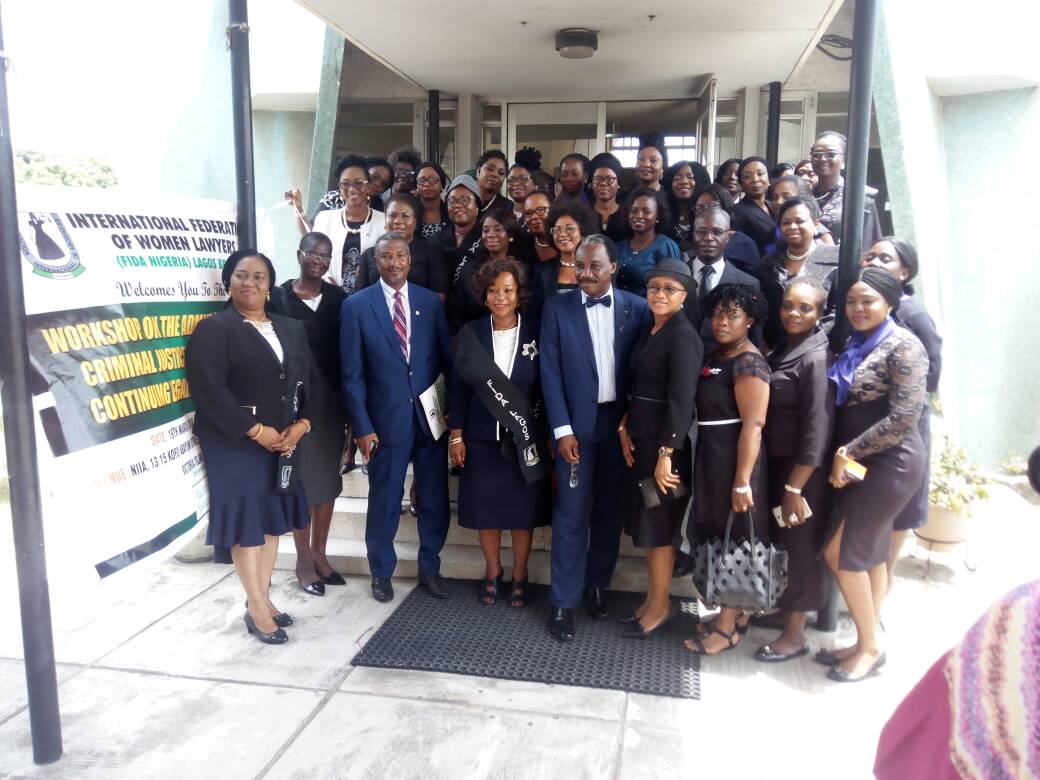 Across the branches of FIDA Nigeria, the MacArthur Foundation supported the Enabling Capacity for the adoption and implementation of the ACJA, 2015. The project spans from 2017-2020.

The project aimed at building the capacity of FIDA members in the criminal justice sector across the state through Continuing Legal Education workshops to engage and improve the Nigeria Criminal Justice Sector thus enhancing access to justice for the indigent women and children.

The project also seeks to provide educational and technical support to the state houses of assembly yet to adopt the ACJA, 2015. 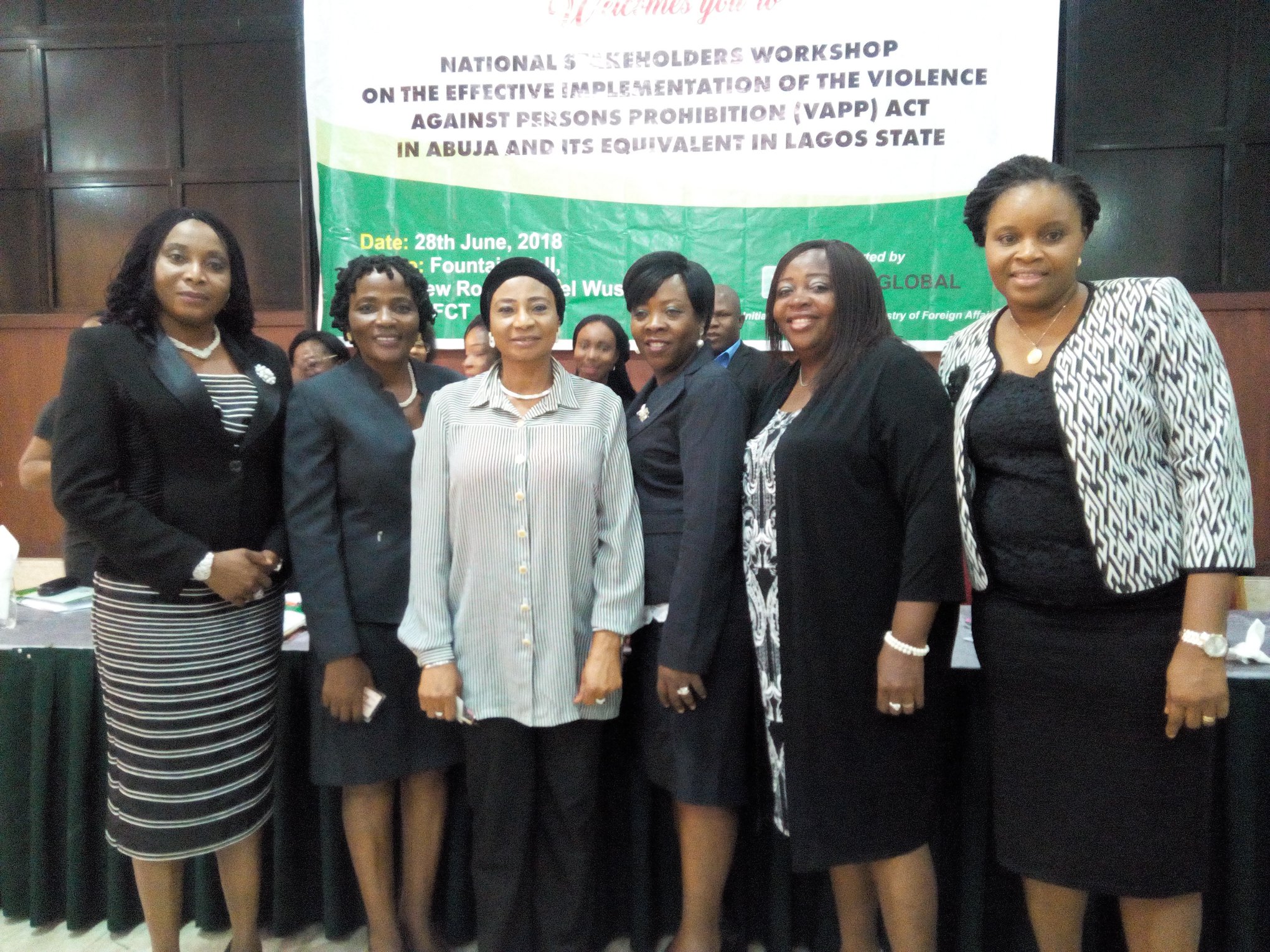 Under the project, FIDA Nigeria hosted a National Stakeholder’s Workshop in Abuja to create more awareness on the need for the effective implementation of the VAPP Act 2015.

The stakeholders Workshop ended with a communiqué with an eight-point recommendation;

a. The issue of poor funding especially the budgetary allocation of the National Agency for Prohibition of Trafficking in Persons and Other related matters (NAPTIP) which is the body responsible by the provision of the Act for the monitoring the punishment of offenders of this Law.

b. The need for the provision of shelters at every major town of a State for survivors of violent acts.

c. The need for increased sensitization of citizens on the innovative provisions of the Act by collaborative efforts of all stakeholders.

d. The amendment of the VAPP Act to address the lacuna highlighted above.

e. The need for all States House of Assembly of the Federal Republic of Nigeria to adopt the VAPP Act.

f. The need for orientation to change the mindset of citizens especially as it relates to the culture of silence and stigmatization of survivors and victims.

g. Provision of adequate infrastructure for all sectors involved in the implementation of the Act.

h. The need for proper enlightenment and sensitization of the NIGERIA Police force to effectively carry out their roles as provided by the Act.

Efforts to keep accurate statistics on gender-based violence in Nigeria; FIDA Nigeria collaborated with the United Nations Population Fund (UNFPA) and other stakeholders on the development and implementation of Information Management System.

The sole aim of the GBVIMS is to harmonize data collection by GBV service providers in the humanitarian and project settings and provide a simple system for service providers to collect, store and analyze data, and to enable safe and ethical sharing of reported GVB incident data.

This project targeted over sixty thousand internally displaced persons (IDPs) with the aim of providing legal information and assistance to ensure that the target beneficiaries enjoy the gains of justice system.

The project was funded by International Organization on Migration in Borno State while the activities include;

With support from IPAS Nigeria supported the Legislative Advocacy Coalition on Violence against Women (LACVAW) through FIDA Nigeria to conduct a sensitization outreach to Bwari Area Council, Abuja on the provisions of the VAPP Act, 2015 in December 2015.

While in June 2016, IPAS Nigeria supported FIDA Nigeria for a sensitization outreach to Jabi Junior Secondary School, Life Camp, Abuja on the provisions of the VAPP Act, 2015.

The project involves drama presentation by the drama club on issues of child sexual abuse, how children can seek help if violated based on the provisions of the VAPP Act, 2015 and the CRA, 2013.