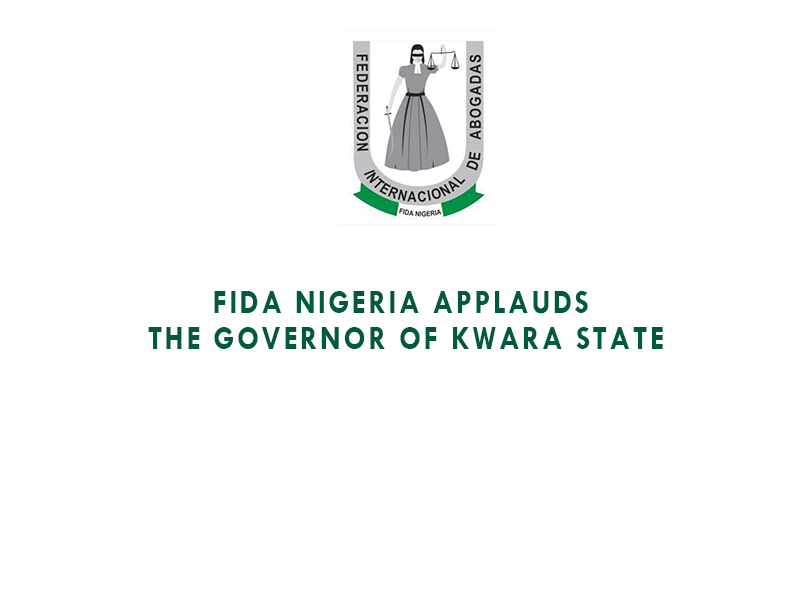 The International Federation of Women Lawyers (FIDA) Nigeria, applauds the Kwara State Governor Abdulrahman Abdulrazaq as nine women made the shortlist of commissioners in the State.

According to the Chief Press Secretary to the Governor Mr. Rafiu Ajakaye, with the nine women on the list, female gender representation in the cabinet would be 56. 25 per cent, while that for men would be 43. 75 per cent, a position worthy of commendation and emulation.

FIDA Nigeria desires greater acceleration to the process on gender parity. Therefore we see this move as a great step in the right direction being that we all have a role to play in creating this balance in the different structures and institutions in society; this parity is paramount so society can function at its optimum, such that it would be beneficial to all across board.

FIDA in promoting and advocating for the protection and preservation of the rights of women and children, strongly commends the Governor of Kwara State for the act of prioritizing gender interest in his government by having more women shortlisted for membership of his cabinet.

This act is exemplary and goes to speak of His Excellency’s interest in gender equality which ripple effect encourages the empowerment of women in leadership and other positions.

We also call on other states and indeed the Federal Government to emulate this act to ensure that women are more actively involved in governance in Nigeria.

The International Federation of Women Lawyers (FIDA) Nigeria proudly adds her voice to celebrate women’s contributions to all levels of National development as we continue to state that:

‘A balanced world is a better world;

A balanced world will not bring down men; and

FIDA on all to be great watchmen such that where there are lapses or any absence of balance, we speak out and take progressive steps to balance it out.

We must all continue to Think Equal, Build Smart, and Innovate for Change as we collectively strive for equality in our society.

FIDA Nigeria on the 15th of June 2021, officially inaugurated her 36th branch, FIDA Nigeria, Katsina State. Her Excellency the wife of the Kastina...

FIDA Nigeria with the support of ActionAid and funding from Global Affairs Canada held a three-day appraisal/review meeting of FIDA Nigeria’s 5-year...