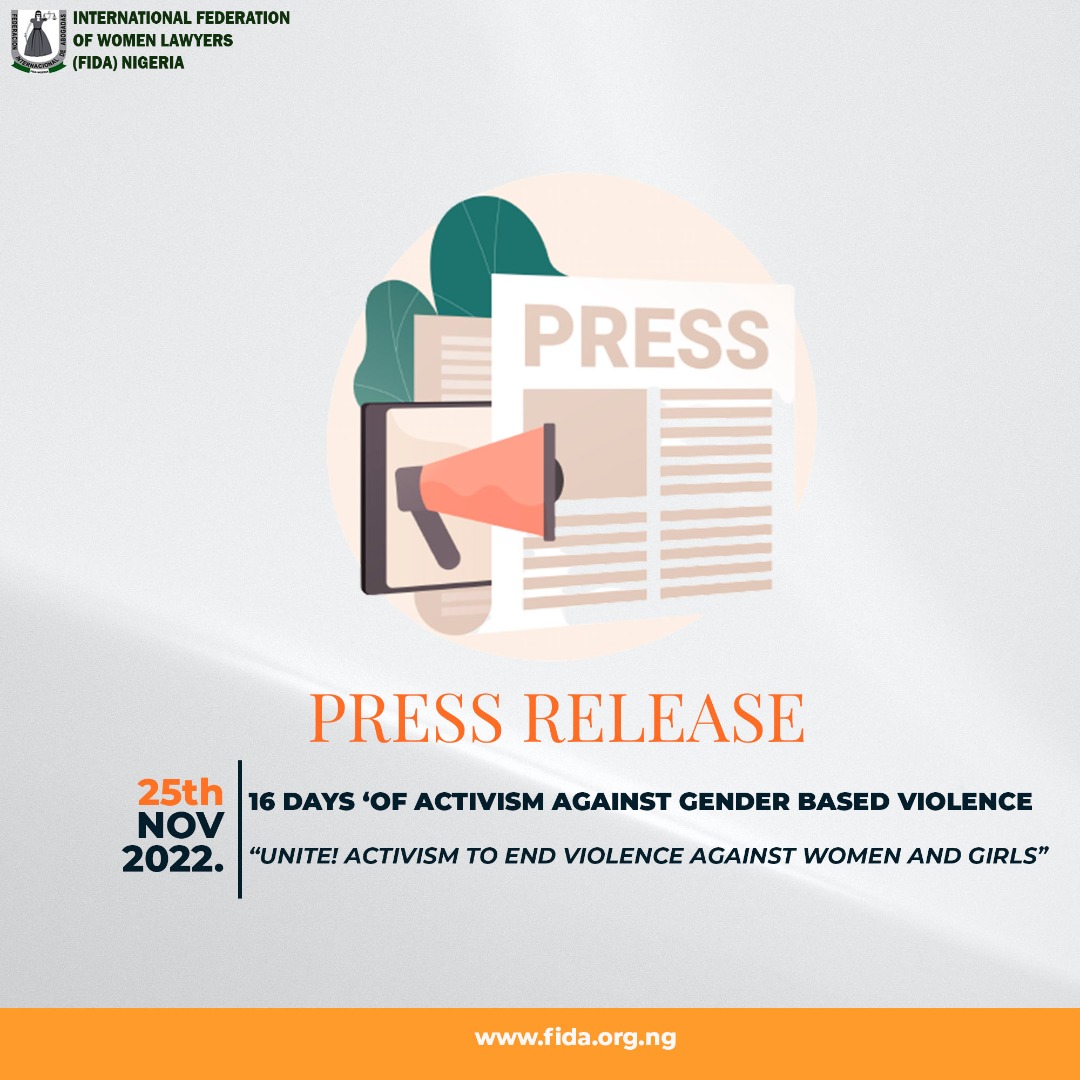 “UNITE! Activism to end Violence Against Women and Girls”

The 16 Days’ of Activism against Gender-Based Violence is a United Nations observance recognized annually from the 25th of November to the 10th of December (Human Rights’ Day), to drive awareness of the ills of violence in our communities and nations while seeking an end to all forms of violence.

This year’s global theme “UNITE! Activism to end Violence Against Women and Girls”, couldn’t have been more apt in view of the rising incidences of violence globally. Gender-based violence (GBV) which comprises of harmful acts directed at an individual based on their gender identity has been an ugly scourge worldwide. It is deeply rooted in gender inequality, abuse of power, harmful norms, cultural practices that are repugnant to natural justice, equity, and good conscience. It is the most pervasive human rights’ violation which knows no economic or social status, power ranking, individual prestige, class or caste system, national boundaries, or any other human considerations. It manifests in physical, verbal, socio-economic, sexual, and physiological ways, amongst others.

Gender-Based Violence is also one of the most pronounced declaration of the unequal power play between the male and female gender,  caused by some factors including Cultural (patriarchal views, gender stereotypes, societal expectations of masculinity and femininity, socialization of gender, general acceptance of violence as an acceptable means to resolve conflict); Economic factors such as lack of economic resources making women more vulnerable to violence; Political factors including under representation of women in power and politics resulting in fewer opportunities to shape decisions that affect policies and equality, and adoption of measures to combat gender-based violence.

This scourge has become a global pandemic which if left unchecked has the potential to send entire societies into ruination due to its life-threatening component. Before the emergence of Covid-19, the issue of gender-based violence had steadily been on the increase, however, with the advent of the Covid-19 pandemic, this epidemic has aggressively accelerated and statistics now show that One out of every three women has experienced this scourge in their lifetime. This illustrates that it has indeed reached pandemic proportions.

Bringing it closer home to Nigeria specifically, the cases of Gender Based Violence have risen exponentially, partly due to continuous terrorism activities, sustained patriarchal outlook of the society, repeated economic disadvantage of the female gender and the seemingly discrimination with respect to female participation in political spaces, resulting recently in a protest spearheaded by FIDA and other notable Civil Society Organizations against the rejection of gender-sensitive Bills by the Nigerian National Assembly.

FIDA, a leading voice in the fight against all forms of violence as well as those that present as a result of gender differences, has over the years incessantly advocated for a complete elimination of violence in our society through various mediums which include, advocating for acceleration in criminal justice responses to incidences of violence, pushing for stiffer penalties for GBV offenses; identifying discriminatory laws that translate to gender-based violence and pressing for their repeal/legislative review.

Some other measures consist of Building capacity and training of relevant stakeholders for efficient analysis of data emanating from GBV cases; massive grassroot sensitization in indigenous languages of the relevant laws that deal with gender-based violence such as the Violence Against Persons Prohibition (VAPP) Act 2015; the Childs Right Act, Administration of Criminal Justice Act (ACJA); amongst other laws; pushing for adoption of these laws by States that are yet to do so; Sensitizing the public on the ills of gender-based violence; intensive training of Community Paralegals towards mitigation of GBV; Capacity building workshops for stakeholders at various strata; continuous dialogue with Community Gatekeepers, Traditional rulers, Faith and Religion based Leaders towards changing societal patriarchal outlook, amongst other various interventions.

This year, FIDA Nigeria is amplifying the global call for action by calling for an improvement of existing strategies and the formulation of new ones towards a complete eradication of this cancerous epidemic. These new strategies MUST be targeted at comprehensive and multi-faceted solutions, sustainable policies, stronger commitments, and the necessary executive will of government which MUST translate to action to end all forms of gender-based violence particularly those aimed at women. This is in line with Sustainable Development Goal 5.2. Our global voices have indeed reached a crescendo!!!

It is time to end all forms of Violence in our societies and globally! Enough is enough!