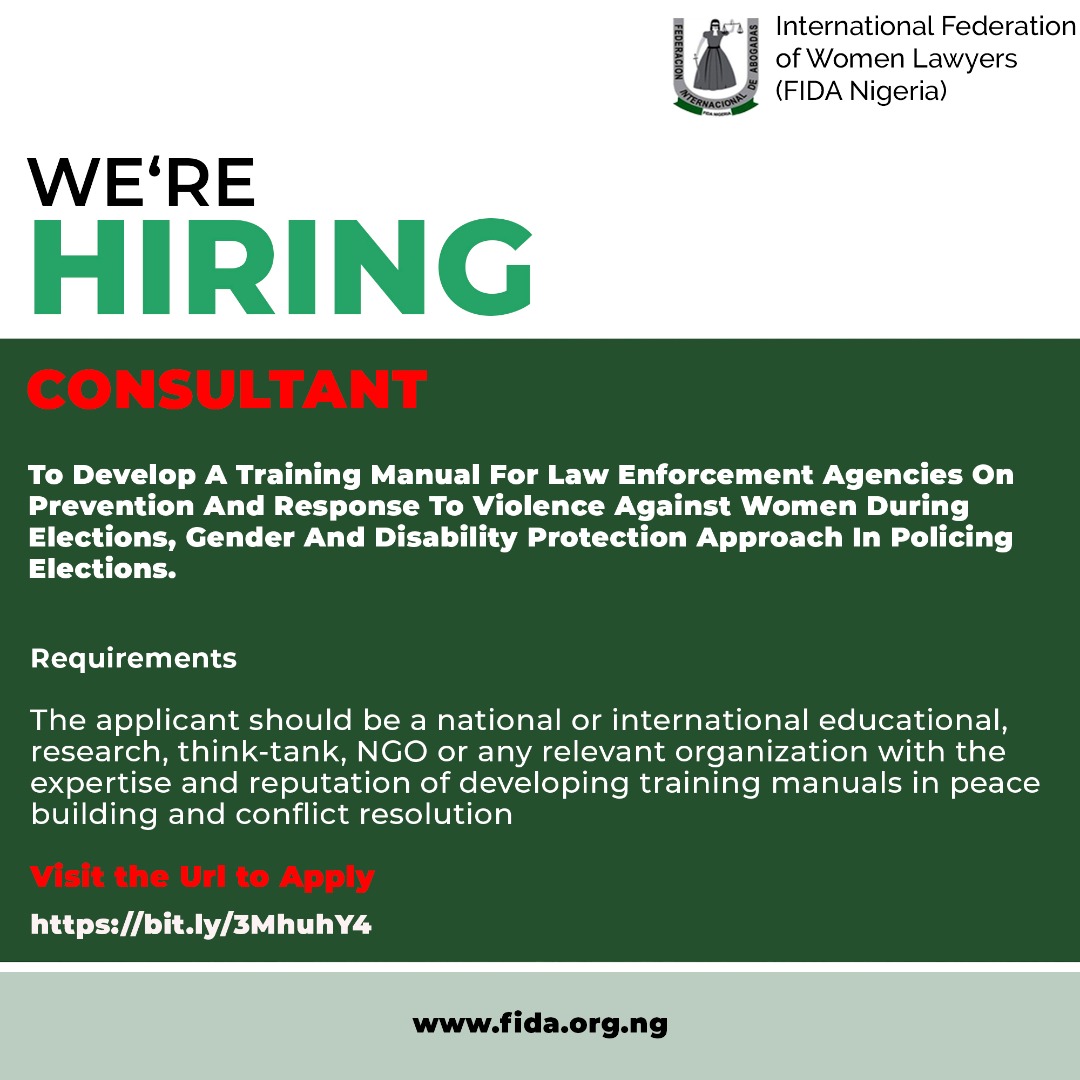 Call For Expression of Interest to Develop A Training Manual For Law Enforcement Agencies On Prevention And Response To Violence Against Women During Elections, Gender And Disability Protection Approach In Policing Elections.

Introduction
The International Federation of Women Lawyers (FIDA) Nigeria is a non-profit, non-governmental organization made up of over 4,000 female lawyers with several years’ experience in utilizing the law to address social problems in Nigeria. The organization’s mandate is the enhancement, promotion, protection and preservation of the rights and welfare of women and children in Nigeria. FIDA Nigeria implements key projects and activities aimed at providing access to justice to indigent persons, particularly women and children.

Background
Women constitute a powerful electorate with millions of votes. According to the Independent National Electoral Commission (INEC), Nigerian women signaled their intention to make their voices heard in the 2019 election, accounting for about 47.14 per cent (39,598,645 million) of the 84,004.084 million registered voters nationwide. In 2015, three million, six hundred and sixty-seven thousand, and seventy-six (3,667,076) housewives voted in the presidential election, placing next to students (4,480,708) and civil servants (4,628,433). Similarly, housewives rank third on the list of registered voters by group in the 2019 election. They represented 14.10 per cent of the total registered voters by group, next to farmers/fishers (16.23 per cent) and students (26.57 per cent). This figure does not include the millions of women across the various other groups

However, inspite of this progress recorded, Women’s participation in the elective positions has been minimal and has multi-dimensional implications for the democratic project in Nigeria and for the continuing quest for gender equality in Africa’s biggest economy. The 2019 elections was the sixth consecutive general elections since the beginning of the fourth republic in 1999. This marks what is undoubtedly a measure of democratic progress, if only for conducting periodic elections since the return to civil rule. What remains deeply in doubt, however, is how inclusive this progress has been and, in particular, to what extent women have benefited from the democratic dividend of equality and fairness. With gender issues and women’s political and economic empowerment taking center stage on the global arena, Nigeria appears intent on maintaining its position at the bottom of the ladder of women’s political empowerment. Recent data indicates that women’s rates of participation in formal decision making remain one of the lowest on the continent and across the world with women occupying an abysmal 5.6 per cent (86 out of 1534) of all elective positions at both the national and subnational levels.

The lack of inclusive participation of women and youth in the political affairs and governance is alarming. Women and youths who constitute a critical population are aloof or less involved in politics and governance. They are not also proactively demanding for accountability from the government and governmental actors. Participation of the majority of the youths and women in politics and electioneering takes the form of vote buying & selling during elections. The monetization of the electoral process makes it very expensive and difficult for credible persons in the communities, particularly women & youths to aspire for political party offices and general elective positions.

Essential to women participation is the eradication of political violence, in other words, it is of paramount importance to condense political violence before and after elections so that women can fully participate in elections . In the same degree The International Institute for Democracy and Electoral Assistance (IDEA) states that, elections have triggered outbreaks of violence in which women and girls were victimized. In others instances violence against women has been a tool of political harassment and intimidation of female election candidates. In addition, female voters continue to be disproportionately affected by various forms of election-related violence or threats of violence which has the effect of keeping them away from the polling stations more than male voters.

Purpose of Consultancy
As the countdown to 2023 General Elections emerges, The International Federation of Women Lawyers (FIDA) Nigeria with support from UNWomen will implement her intervention tilted toward improving women’s participation in Nigeria across four focal states namely Kwara (North Central), Borno (North East), Plateau (North Central) and Kaduna (North West). The project aims to mitigate violence against women in elections through a collaborative and systemic approach with Stakeholders such as the Independent National Electoral Commission (INEC), the Nigeria Police Force, Security agencies, the Electoral institute and other credible organizations.
We will through our various interventionist approaches aim at improving the participation of women at the general elections by strengthening the capacity of selected networks, institutions, electoral bodies, and oversight mechanisms to better prevent and respond to VAWP, SGBV and other forms of VAW” that may deter female electorates towards exercising their franchise at the polls across the four project states of, Borno, Kwara, Kaduna, Plateau States. Based on the above, FIDA Nigeria is seeking to engage a consultant to develop a training manual on prevention and response to violence against women during elections, and gender and disability protection approach in policing elections for Law Enforcement Agencies.

Duties and Responsibilities
The successful candidate will be tasked to develop a comprehensive manual with the following tepical sessions: Introduction to VAWE (Violence against Women in Elections),Mapping and measuring VAWE—(Violence against Women in Elections),Violence against VAWE, Legal and Policy reform to prevent and respond to VAWE, Integrating VAWE into Election Observation/Violence, Monitoring, Preventing and Mitigating VAWE through electoral arrangements and disability &Social inclusivity in election security management

Review and Validation of the Training Manual
In collaboration with the Project Team, the Programme Manager shall review and validate all contents of the training manual. A proposed training manual outline and method for teaching each topic/chapter shall be submitted to fidanigeria@yahoo.com. The training materials developed must be delivered to the National Programme Manager on a date not later than the deadline for submission via email on fidanigeria@yahoo.com.

Requirements
The applicant should be a national or international educational, research, think-tank, NGO or any relevant organization with the expertise and reputation of developing training manuals in peace building and conflict resolution.

Duration
The assignment is for a period of five weeks from the date of signing the contract.

Fees
The fees for this assignment is subject to negotiation with the selected individual.

How to apply
Qualified candidates should send curriculum vitae and cover letter detailing relevant experiences to the addressed to the Country Vice-President/National President to hr@fida.org.ng or fidanigeria@yahoo.com
Subject of e-mail should be “Application for Consultancy to develop a training Manual”

Deadline: Applications should be submitted on or before 10th October 2022.