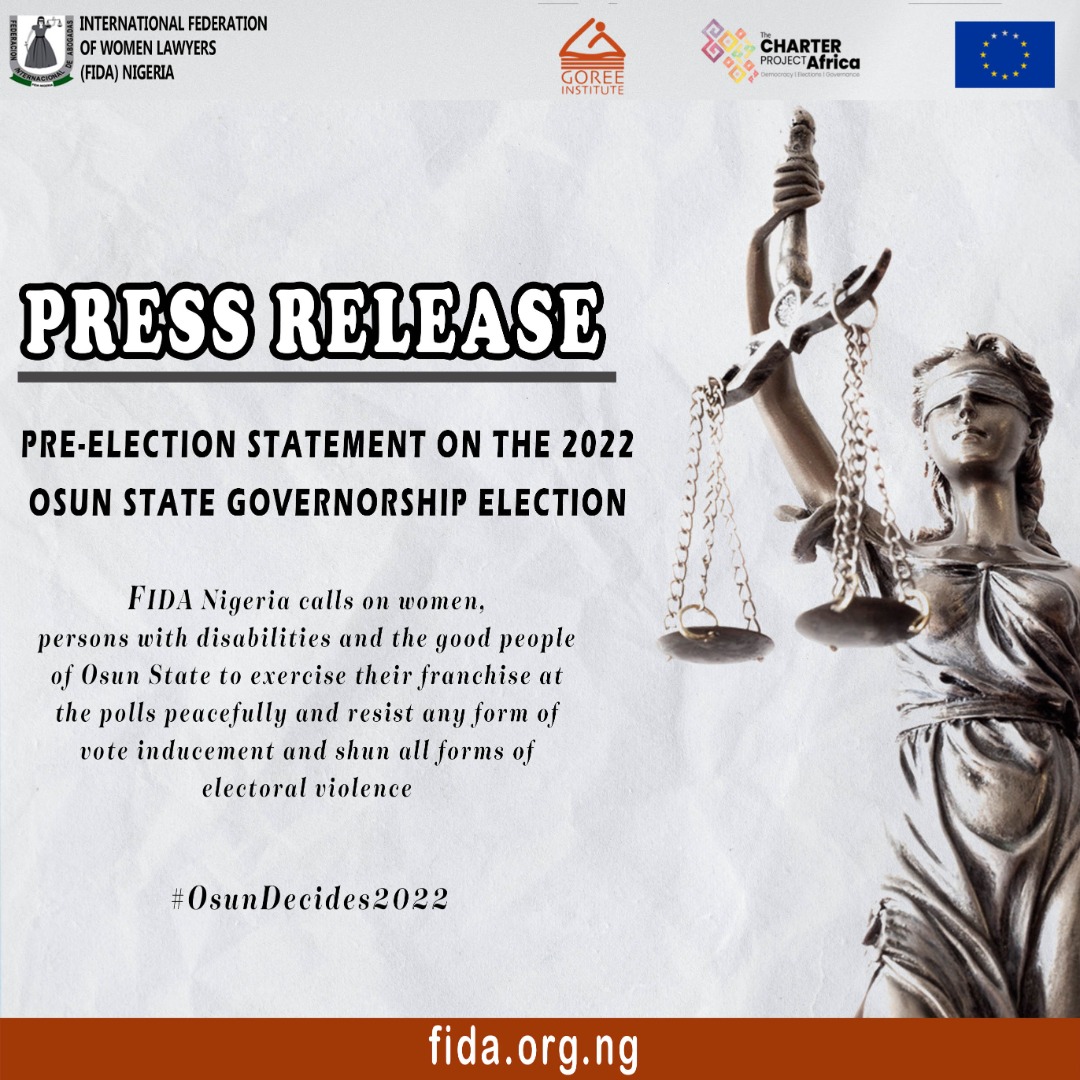 On Saturday 16th July 2022, citizens of Osun State will exercise their franchise at 3,763 polling units within 332 registration area centers across the state towards electing a Governor at the off-cycle gubernatorial elections. This election marks the second election conducted following the enactment of the Electoral Act 2022 with attention hinged on the Independent National Electoral Commission (Electoral Management Body) performance in administering the polls.

The International Federation of Women Lawyers (FIDA Nigeria) has diligently observed situational happenings and pre-election incidents ahead of the elections. We have observed an upsurge in the total number of registered voters with an increase from 1.6 million at the last gubernatorial elections in 2018 to about 1.95 million presently. This indicates that more citizens are engaging in the political process and have taken advantage of the continuous voter’s registration towards ensuring that their votes count at the polls.

During the 2018 Osun Governorship Elections, a total of 48 Political Parties fielded candidates for the Governorship elections, however at the forthcoming elections, electorates will be given the option to choose from the 15 political parties fielding candidates at the polls. During our pre-election observation, which is clearly qualitative, we observed that none of these fielded candidates are neither females or persons with disabilities which has imposed some limits on the aspirations of women and persons with disabilities for the highest executive position in the state. We however appreciate the fact that six of the political parties contesting at the polls fielded women aged between 36-60 years as Deputy Governorship Candidates.

FIDA Nigeria with support from Goree Institute under the Charter Africa Project will observe the participation of women and persons with disabilities at the polls through trained citizen observers deployed across the 30 Local Government Areas of Osun State. An election monitoring tool has been developed and our approach in observation will be both qualitative and quantitative as we will leverage on partnerships with other civil society actors in documenting election incidences promoting violence against women and persons with disabilities at the polls.  FIDA Nigeria citizen’s engagement will be made possible through the establishment of a situation room in Oshogbo, the Osun State Capital, and our National Secretariat where our Data Analysts will be documenting and analyzing findings from our citizen observers through the help of civic technology.

i. Securing the polls: We expect strategic deployment of security personnel across the 3,763 polling units of the state towards forestalling any form of violence at the polls which will limit the participation of women, persons with disabilities, and other vulnerable groups. We applaud the deployment of 21,000 police personnel by the Nigeria Police which will ensure that a minimum of four police personnel are stationed in every polling unit in line with global best practices. We call on other sister agencies like the Nigeria Security and Civil Defence Corps and the Economic and Financial Crimes Commission to massively deploy her personnel at the polls to checkmate violence and all forms of vote-buying that may impede the credibility of the poll.  We hope to find security personnel at the polling units identified by their name tags and demonstrate non-partisanship in the discharge of their responsibilities.

ii. INEC logistical arrangements to aid priority voting for vulnerable groups: We expect early deployment of sensitive and non-sensitive election materials at the polling units as well as election officials at the commencement of polls. This will help to promote confidence in the system and improve credibility of the poll. We have observed that the Independent National Electoral Commission has religiously followed her set timetable & schedule of activities sequel to the elections which are in consonance with the dictates of the Electoral Act. We hope that the Election Management Body abides by her 2018  framework on access and participation of persons with disabilities in the electoral process and the provisions of the Disability Act of 2019 towards ensuring effective and seamless participation of persons with disabilities in the elections through the provision of magnifying glasses for persons with low vision & albinism, braille for persons with visual impairment & providing priority voting for persons with disabilities, nursing mothers, pregnant women, the aged/elderly and other vulnerable groups at the polls.

iii. High turnout of female voters: We expect that the increase in registered voters will translate to more voters especially women and persons with disabilities participation at the polls. We recall that at the 2018 gubernatorial elections only 696,007 voters representing about 43.5% of the total voting population exercised their franchise. We expect that due to an increased voters’ awareness and continuous voters registration, more women will participate actively which will transcend to an increased voters turn-out at the polls.

FIDA Nigeria calls on women, persons with disabilities, and the good people of Osun State to exercise their franchise at the polls peacefully and resist any form of vote inducement and shun all forms of electoral violence. Political parties are also enjoined to conduct themselves creditably in order to promote a peaceful process.

In 2021 the UNODC and UN Women reported that on average, more than five women or girls were killed every hour by someone in their own family. This scourge...