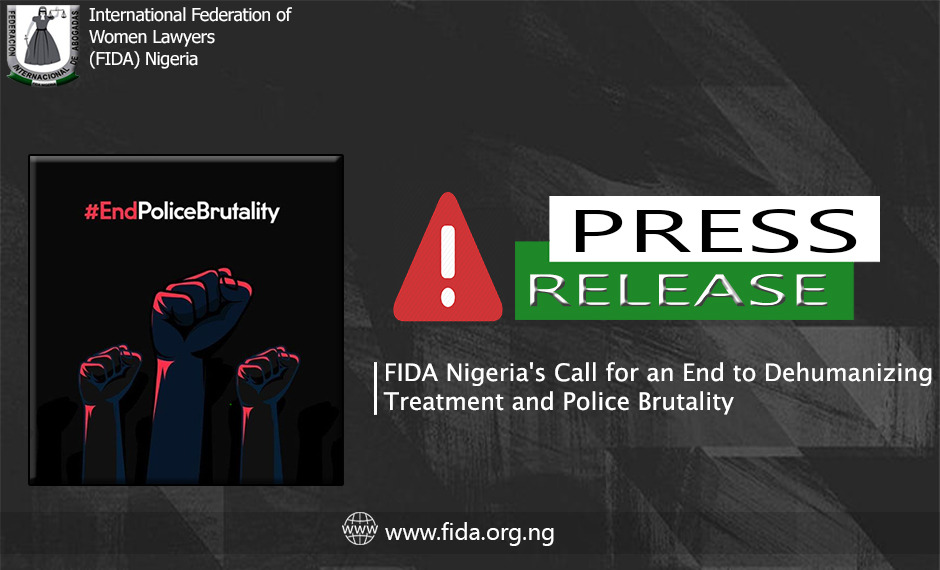 The International Federation of Women Lawyers (FIDA) Nigeria joins in speaking out against the repeated wave of Police brutality, abuse and infringement of Human rights, which has led to the #EndSARS & #EndSWAT Protests going on around the country.

Shockingly, the Police in response have continued to attack protesters, arrest and detain them for protesting, while shooting live rounds at protesters often resulting in grievous bodily harm and even death in some cases

We must all rise up to speak out against and to Stop All forms of Police brutality against the vulnerable members of our society particularly women and the youth. Enough is Enough!

Citizens deserve respect from law enforcement officers who are commissioned to principally defend, protect and support the defenseless in society, not oppress, torture, dehumanize and kill them. We find that police inefficiency, unprofessionalism and brutality has become the new order of the day and this must stop.

Despite the dissolution of the Special Anti-Robbery Squad (SARS) by the Inspector of General of Police on Sunday, 5th October 2020, following massive protests and the setup of SWAT in it’s place the protests have continued because the fundamental issues have not been properly addressed concerning the police force. They must be addressed!

The Nigerian Government must therefore take most seriously, her responsibility to protect the lives and property of her citizens as enshrined under Section 14(2)(b) of the 1999 Constitution of the Federal Republic of Nigeria (as amended).

We commiserate with the families of those who have lost their loved ones and we demand a thorough independent investigation into all the pending cases on police abuse, brutality, and murder. All Officers found guilty must be brought to book, in the spirit of Justice for All.