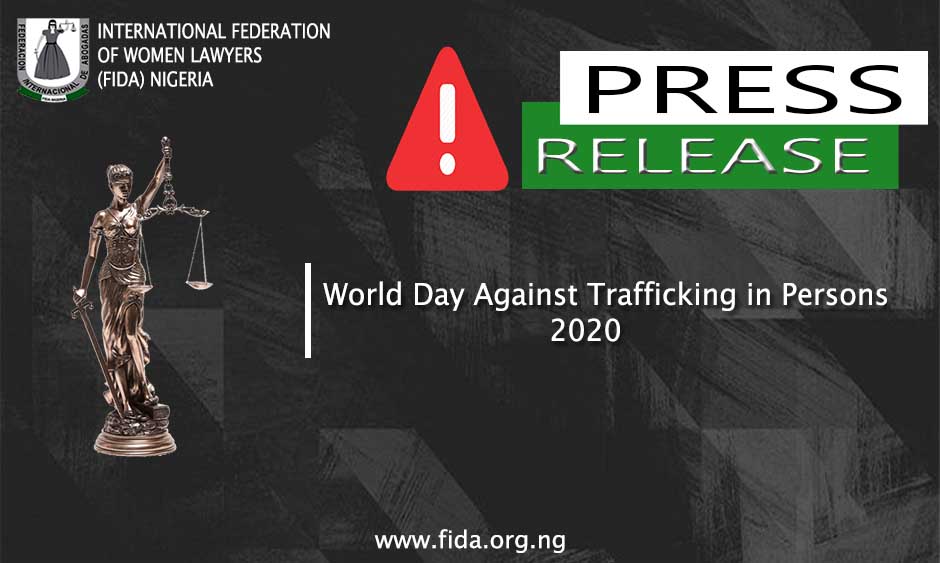 Trafficking in persons is a serious crime which often transcends borders (state or international) and is a grave violation of human rights.

Victims of human trafficking are deprived of their most basic human right which is the right to freedom, they are often forced into cruel and dehumanizing living and working conditions and are helpless to leave their exploitative situation or seek help.

In Nigeria, human trafficking is specifically criminalized under the Trafficking in Persons (Prohibition) Law Enforcement and Administration Act, 2003. In addition, the Child Rights Act 2003 (CRA) also criminalizes child trafficking, but sadly only 25 of the country’s 36 states, including the Federal Capital Territory, have enacted the law. FIDA encourages the remaining States to enact the CRA.

Section 82 of the Trafficking in Persons (Prohibition) Enforcement and Administration Act, 2015 defines “Trafficking or traffic in persons” as the recruitment, transportation, transfer, harbouring or receipt of persons by means of threat or use of force or other forms of coercion, abduction, fraud, deception, the abuse of power of a position of vulnerability or the giving or receiving of payments or benefits to achieve the consent of a person having control over another person or debt bondage for the purpose of placing or holding the person whether for or not in involuntary servitude (domestic, sexual or reproductive) in forced or bonded labour, or in slavery-like conditions, the removal of organs or generally for exploitative purposes. There are indeed many facets to human trafficking for which we must be mindful of.

The act is evil and criminal and mostly targeted at vulnerable people; it must be stopped!

The UN theme for this year’s commemoration is “Working on the frontline to end human trafficking”, with a focus on the first responders to human trafficking. This covers the various people who work in the different sectors – those identifying, supporting, counselling and seeking justice for victims of trafficking; while also challenging the impunity of the traffickers.

During this COVID-19 pandemic, the essential role of first responders has become even more important, particularly as the restrictions imposed by the pandemic have made their work even more difficult. Still, their contribution is often overlooked and unrecognized. FIDA commends the effort and service of all first responders and all NGOs playing a key supporting role here.

According to the National Agency for the Prohibition of Trafficking in Persons (NAPTIP) 2019 report, two hundred and three cases were fully investigated by the Agency. Cases of child abuse and procurement of persons for sexual exploitation constituted 17.7% and 9.4% respectively. NAPTIP also reports that the average age of trafficked children in Nigeria is 15, while Nigeria has now upgraded to a Tier 2 country on the U.S. State Department’s Trafficking in Persons Report (2019).  75% of those who are trafficked within Nigeria are trafficked across states, while 23% are trafficked within states NAPTIP (2016) report. We must keep a careful watch on these numbers, and improve on data collection.

FIDA appeals that the challenges often encountered by first responders to human trafficking should be promptly addressed to better facilitate their work. These include:

–  Limited understanding of all aspects of labour trafficking based on clear definitions with properly laid out government programmes and policies for labour trafficked victims.

Many trafficked victims often fall prey because they seek a better life or enhanced economic opportunities. They are, therefore, vulnerable to false promises of good jobs and higher wages. Political instability, militarism, civil unrest, internal armed conflict, natural disasters and indeed the negative effects of the Covid19 pandemic can also result in an increased number of victims in trafficking.

The destabilization and displacement of communities as such increases their vulnerability to exploitation and abuse through trafficking and forced labor. Consequently, civil strife and people from displaced communities, living in IDP camps and so forth likewise results in a lot of orphans and street children who become extremely vulnerable and susceptible to trafficking. We must again be watchful and guard against this, while taking pre-emptive steps to greatly reduce such occurrences.

– Quip, collaborate with and support the various people who work in the different sectors, identifying, supporting, counselling and seeking justice for victims of trafficking especially the relevant agencies such as NAPTIP and NHRC

– Government needs to put greater protective and security measures in place to curtail the crime of human trafficking. -State and national borders need to be better regulated to ensure that people are not subjected to illegal transportation and exploitation.

– Advocacy/outreaches targeted at the youth/parents/guardians to help mitigate the menace of trafficking.

FIDA Nigeria appreciates the hard work agencies and ministries of government including NGOs are doing in this respect. FIDA pledges continued support in the fight against human trafficking and looks forward to more collaborations in this fight to ensure that women and children can live in a society free from exploitation and abuse.

FIDA NIGERIA says NO to all forms of trafficking