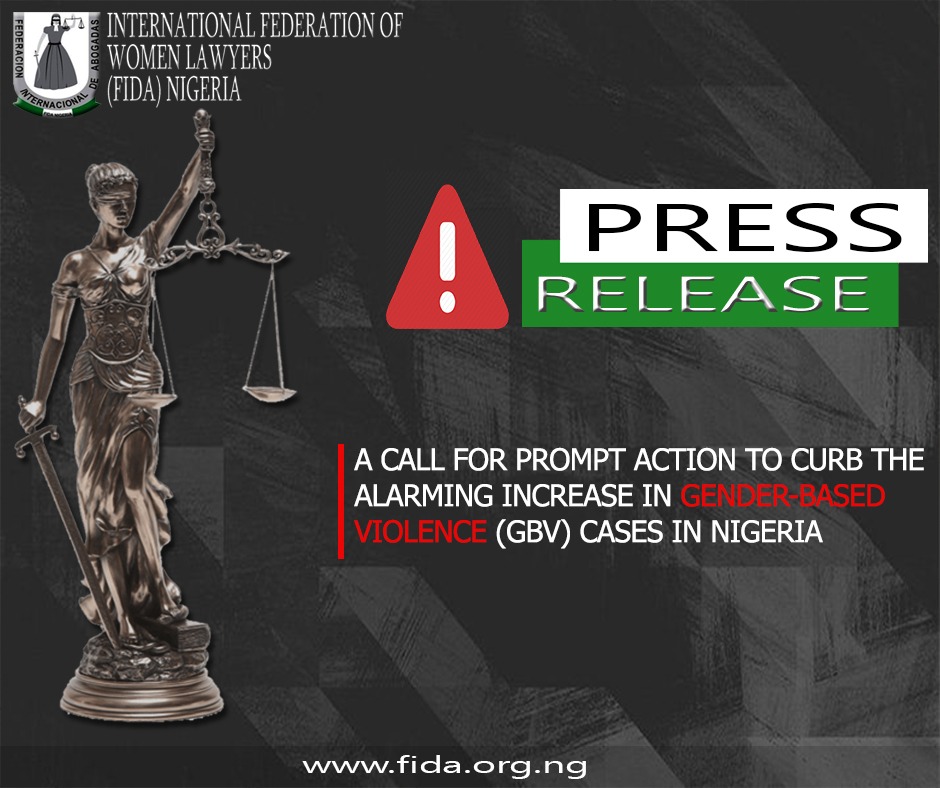 ATTORNEY GENERAL OF THE FEDERATION,

CHIEF JUDGES OF THE STATES OF THE FEDERATION,

SPEAKERS OF THE STATE HOUSE OF ASSEMBLY,

ATTORNEY GENERALS OF THE STATES OF THE FEDERATION,

COMMISSIONERS OF POLICE OF THE VARIOUS STATE COMMANDS AND

It is no more news that there has been a tremendous acceleration in the number of gender-based violence cases, particularly the abuse and rape of women and the defilement of babies and children across the States of Nigeria. With these evil and unpleasant happenings in our communities, our children, girls, and women are no longer safe.

FIDA Nigeria makes this clarion call to major key players for a more holistic and aggressive approach in tackling this serious challenge across Nigeria.

FIDA Nigeria strongly objects to this evil trend of the incessant abuse and sexual molestation of women and children and demands speedy and decisive action.

The government needs to declare a state of emergency on gender-based violence so it is tackled forthwith, most efficiently and effectively across all states of the Federation.

Rape and Defilement are CRIMES! If you do the Crime, you must be prosecuted and adequately punished for the crime. There must be NO Compromise nor the settlement of any such cases!

FIDA’s mandate is to protect, preserve, and promote the rights of the vulnerable in society, especially the indigent women and children who are often preyed upon. We must heed their cry and come to their immediate aid.

Also, we advocate that the enabling structures and facilities that will ensure the effective implementation of the VAPP Act be put in place, this includes and most importantly the setting up and efficient running of the Implementation Committee provided for by the law.

FIDA insists on the arrest, prosecution, conviction, and punishment of offenders. We request the setup and activation of ‘Gender desk’ in all police posts or stations manned by trained personnel and the free opening of case files for Gender-Based Violence cases.

FIDA Nigeria calls on ALL to speak out against these evil and atrocious acts meted out against defenceless women and children in our communities. We must rise on their behalf, and demand for justice.  Faith-based institutions, community leaders, must also speak out and condemn such acts.

The shaming, victimization, and stigmatization of Victims of Gender-Based Violence must stop. Rather let us shame the ACT and the perpetrators while encouraging victims to speak out and report all Abuses.

We stand united with other NGOs and CSOs to say NO to this evil permeating our communities.

This is a call to prompt action; because Justice delayed, is Justice denied!

ENOUGH IS ENOUGH - end gender based violencePrev
FIDA Bayelsa, Collaborates with Stakeholders on a Peaceful Walk Against SGBVNext

FIDA Nigeria on the 23rd of October 2021, paid a courtesy visit to the newly appointed Director-General NAPTIP Dr. Fatima Waziri – Azi. The delegation was...