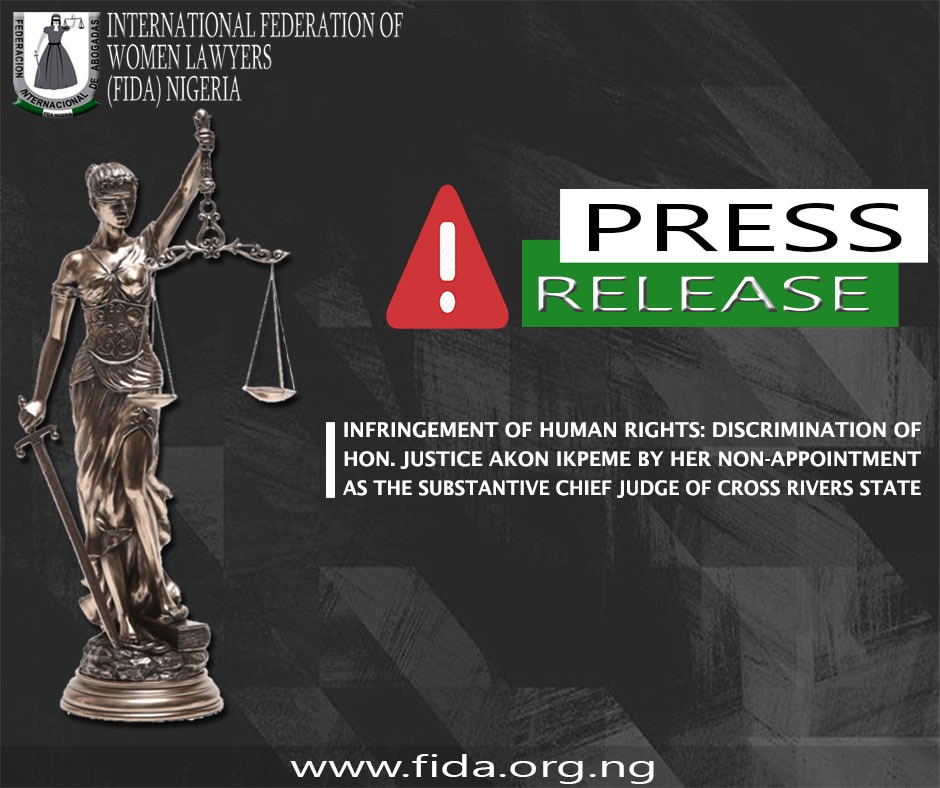 The attention of the International Federation of Women Lawyers (FIDA) Nigeria has been drawn to an act of grave infringement of the human rights of Hon. Justice Akon Ikpeme by the Governor of Cross River State and some members of the State House of Assembly.

It is heart-breaking to note that at this point of our struggle to stop all forms of discrimination in our society, we will be awakened to such discrimination on grounds of ethnicity and political zoning.

Hon. Justice Akon Ikpeme has been the Acting Chief Judge of the state since March 12, 2019, following the retirement of Hon Justice Michael Edem. She has served meritoriously and despite several challenges along the way has accomplished and received a commendation from the Honourable President of the Court of Appeal, Hon. Justice Z. A. Bulkachuwa (CFR) as she then was, for her immense contribution towards achieving a sustainable and independent democracy in Nigeria.

Hon Justice Akon Ikpeme is an indigene of Akwa Ibom State but was born in Cross River State. She married a Cross Riverian blessed with children; She started her career with the Cross-River State Ministry of Justice and rose to the position of Director of Public Prosecution and further appointed a Judge in Cross River State. Even her father was a permanent secretary in Cross River and retired here. Her state of indigene cannot now be used against her. We must not allow ethnicity and politics to be the deciding factor in the appointment of a Chief Judge of Cross River State.

Justice Akon Ikpeme, being the most senior judge in the State, is the rightful person to act as Chief Judge of the State, since nothing else disqualifies her.  The government cannot impose a junior based on tribalism and zoning. Issues such as geopolitical zoning, tribe have no place in evaluating this decision.

Section 271(4) of the Constitution of the Federal Republic of Nigeria, 1999 (as amended) confirms this position and is further supported by our legal professional rules of practice. The profession does not tolerate a deviation from the practice.

Since there is no legal impediment against Hon Justice Akon Bassey Ikpeme who qualifies, we can conclude that the rule of law supports her confirmation.

We, therefore, appeal to his Excellency, the Governor and the Speaker of the State House of Assembly to retract his action which is discriminatory and a breach of the constitution.

FIDA condemns in its entirety the practice of Chief Executives of States attempting to impose their preferred candidates for an appointment either as Judges or Chief Judge of a state. The National Judicial Council is independent and should remain so; there is an order of precedence involving the appointment of a Chief Judge of the state.

FIDA Nigeria unites with other groups in strongly condemning the undue interference and discrimination. This position is sad at a time like this when we are planning towards the celebration of the International Women’s Day, IWD themed: ‘Generation Equality: Realizing Women’s Rights’ … this is a clear infringement of the rights of an honourable woman.

We, therefore, call on His Excellency, the Governor of Cross River State to do the right thing and prove to the world that he abhors all forms of discrimination by swearing in the most senior Judge who has been acting effectively.

FIDA NIGERIA stands against all forms of discrimination and injustice. Let’s stop undue interference with the Judiciary and its processes. The independence of the Judiciary must be assured and guaranteed.