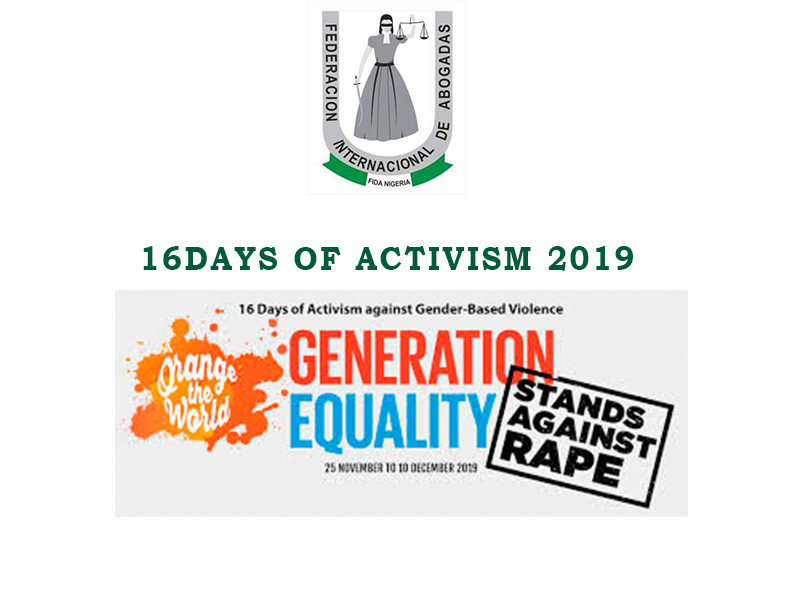 We stand tall and strong today, the 25th of November 2019, the International Day of the Elimination of Violence Against Women as we kick off our 16 days of Activism against Gender Based Violence, carrying out advocacy on the Theme “Orange the World: Generation Equality Stands against Rape!”; And will be rounding up activities on the 10th of December 2019, which is commemorated as Human Rights Day.

This year’s theme focuses on Rape because of the high rate of rape cases reported all over affecting all categories and ages of women and Children . According to UNWomen, 35 percent of women worldwide have experienced physical and/or sexual violence in their lifetime while 11 percent of Nigerian women have experienced physical and/or sexual violence by an intimate partner in the last twelve months; therefore this theme is most relevant now.

We note the reported cases of Rape, defilement and violence not to mention the numerous incidents which go unreported for reasons such as the culture of silence, the stigmatization of survivors, the fear of intimidation and so forth.

FIDA Nigeria based on these overwhelming reports and data, has played a paramount and active role, and even hosted the Secretariat of the Legislative Advocacy Coalition on Violence against Women (LACVAW), all to ensure the enactment of the Violence Against Persons Prohibition (VAPP) Act (2015) which in better details codifies the law, protects the victim and punishes the offender.

FIDA strongly commends and celebrates the following states which have so far enacted the equivalent of the VAPP Act namely Lagos, Edo, Oyo, Anambra, Cross River, Ekiti, Kaduna, Enugu, Ebonyi, Adamawa and Benue states, while calling on the remaining States of the Federation to proceed with dispatch to Adopt and implement the VAPP Act (2015).

The Act has expanded the definition of rape to include different types of penetration on any gender without consent (Section 1 of the VAPP Act). The infraction of Section 1(1) of the VAPP Act is punishable with life imprisonment, Though Section 1(2) gives the judge a discretion to impose sentences less than life imprisonment depending on the circumstances. Worthy of note is the fact that the Act also provides for compensation of victims of rape, this was evidently absent in the previous laws.

With FIDA’s unique composition of over 2,500 volunteer female lawyers in Nigeria, spread across 32 branches in Nigeria we are working at all levels towards the Elimination of Violence against Women(VAW) because we recognize the multifarious nature of gender-based violence.

Consequently, as part of our 16 days activism program we shall  be carrying out different programs such as legal clinics, activism march,advocacy visits, rallies, media and schools out reaches, sensitization and  mobilization programs, including capacity building programs for key stakeholders, community influencers, faith based organizations and other groups on the ills of VAW, the provisions and protections of the VAPP Act, while also advocating for its adoption to suit unique cultural and religious peculiarities or contexts. FIDA shall continue in strategic engagement and advocacy campaigns with other key influencers so as to effectively drive the process necessary for the adoption and effective implementation of the VAPP Law in all the States of the Federation.

FIDA Nigeria therefore calls on all stakeholders to also play an active part in the sensitization, prevention, protection and enforcement to ensure the Elimination of these ills in our society. As we kick off, we call on all good meaning individuals, stakeholders and groups to join us, as we look into, speak out and take practical, effective, and proactive steps to eliminate all forms of Gender Based Violence in the country.

All generations must stand together to fight this menace called ‘Rape’ and indeed all other forms of violence perpetuated on our women (our mothers, wives, daughters, sisters, cousins, nieces, wards, grandchildren etc.) whether young or old.

– The Federal government put in place necessary and appropriate mechanisms, facilities and processes to ensure safe spaces for victims and survivors of Gender Based Violence, particularly victims of rape

– Quick proactive steps must be taken in the reform of our criminal justice system to ensure speedy investigation and prosecution of offenders.

– The different States of the Federation must fast track processes to adopt and implement the Administration of Criminal Justice Act (ACJA) (2015) to ensure speedy dispensation of criminal trials.

FIDA calls on all to realize, appreciate and celebrate the role of the female gender in our society.

Rape is rooted in a complex set of patriarchal beliefs, power and control, This must stop.

Let us work together to instill confidence in the administration of criminal justice, work to remove the stigma attached to survivors, protect victims, while stopping the impunity of perpetuators and ensuring they are brought to justice.

FIDA Nigeria will continue to provide free legal representation and advice to survivors of Rape. FIDA Nigeria pledges to also provide legal representation for non- survivors of violence. It is absolutely necessary that the dignity of every human person especially that of the woman is respected. Accordingly all generations must rise up, speak out and do the needful to stop all forms of violence against women

FIDA stands to promote, protect and preserve the rights of women and girls in society. FIDA says women who are victims of rape demand:

FIDA Rivers State, on the 23rd of June 2022, celebrated the International Widows Day with over 30 Widows at St Barnabas Anglican Church, Bundu Ama...