FIDA Rivers in celebration of the International Day of the African Child visited two schools in Rivers State. Highbrow Montessori nursery, primary and secondary school, Port Harcourt and Community Secondary School, Kalio Ama, Okrika. The children were sensitized on their Rights and Responsibilities, positive use of the internet, Smartphone use tips for students, preventing sexual violence against a third party, PANTS Rules, and many more 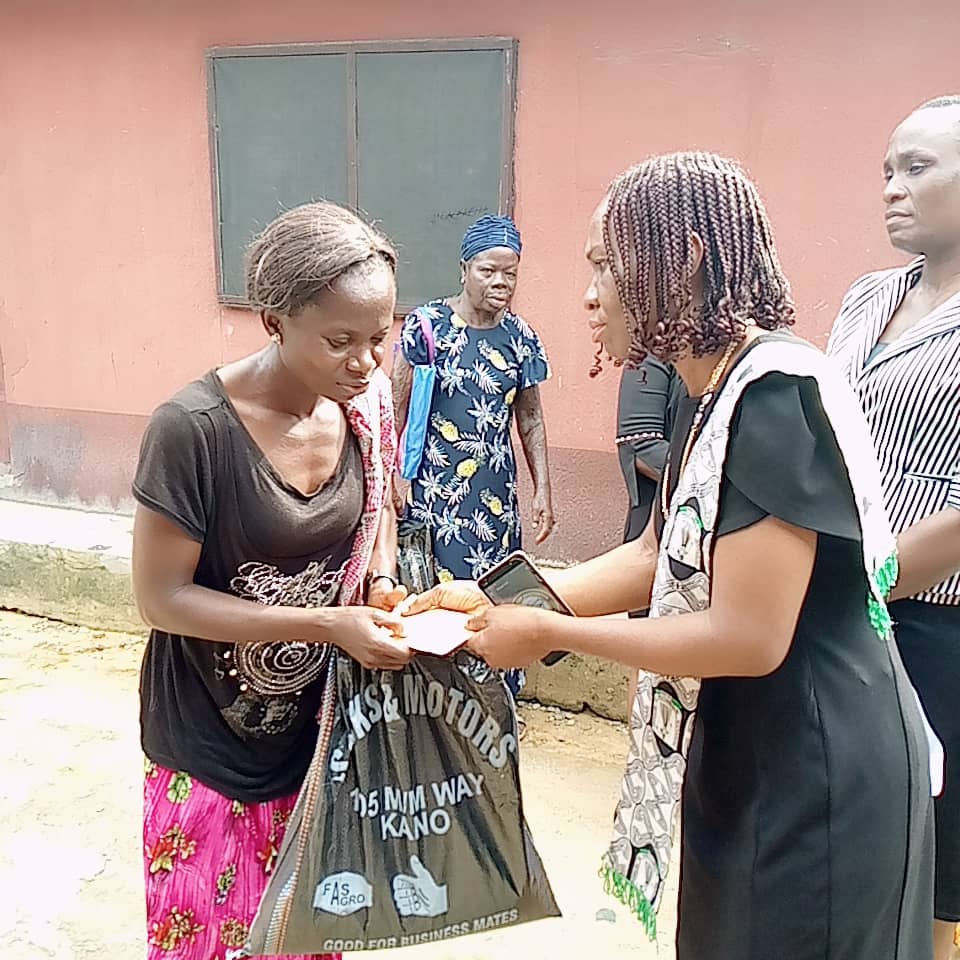 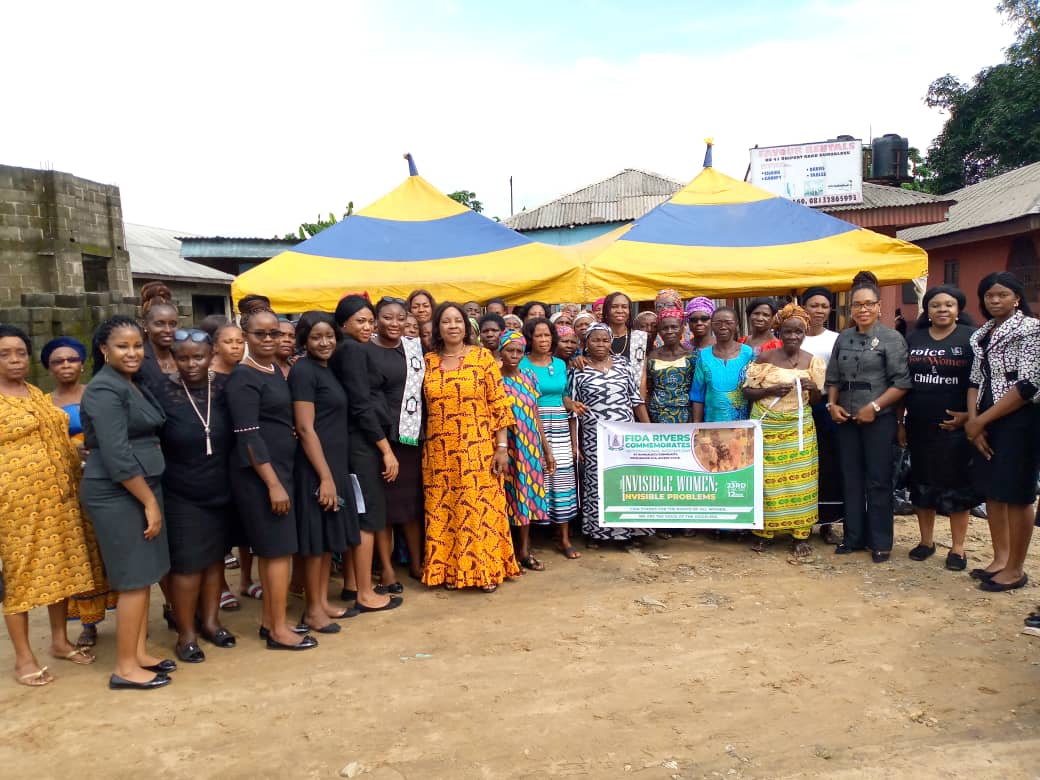 International Day of the Girl Child 2020

In commemoration of the International day of the girl child, 11th  October, 2020, FIDA Rivers in collaboration with Rhema Care Integrated  Development Center in a sensitization advocacy program carried out in Ogbogoro Community, encouraged everyone and particularly the girls in attendance on the need to speak out on every SGBV meted out on them or any other person. 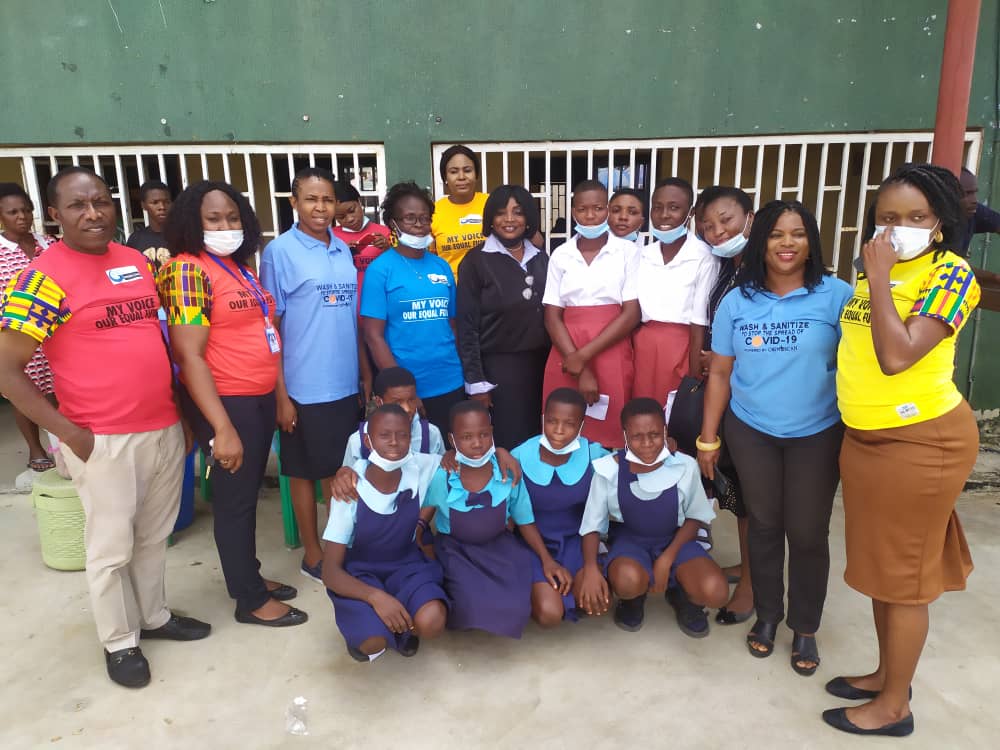 Day 4: Activity on Effective implementation of the Administration of Criminal Justice law in Rivers State.

Compered by Okorite Yobo Briggs and Stephanie Ekpebulu, the day’s event being the last (grand finale), commenced with an opening prayer by the Assistant Comptroller of the Correctional Service, T. S Spiff, followed by introduction of participants.

In his welcome\opening remarks, the FIDA National representative Horsfall Ugboji intimated participants on the core objective of the ACJL and FIDA’s desire to secure a just and peaceful society hence the sensitization of key stakeholders to ensure effective implementation of the Administration of Criminal Justice law in the 14 implementing states, which includes Rivers State.

In her presentation as facilitator for the day, Hon. Justice Florence Atili Fiberesima, enlightening participants drawn from the Bench, Bar, Police and Correctional Services. commenced by saying the ACJL has 49 parts, 505 sections and Forms found in the Schedule.

Highlighting sections relating to stakeholders in ensuring easy application of the law in the course of duty, Her lordship drew attention to clarity of purpose in these words “When the purpose of a thing is known abuse is reduced “. Asking what the stakeholders can contribute to ensure the applicability of this law in the interest of all concerned, Her lordship lamented the under utilization of the provisions of this law especially regarding the forms set out for the prosecution to enable them draft charges appropriately.

Speaking further, Justice Fiberesima reminded participants of the need to distinguish trials of children and young persons’ otherwise categorized as vulnerable persons, using the Child’s Right Law as the ACJL has no provisions for the child except in issues of bail.

Emphasizing the importance of excluding unnecessary parties when taking the evidence of a child, Justice Fiberesima further highlighted sections dealing with Parole and non-custodial consideration as a means of decongesting the Correctional Service Facilities,

Rounding off her presentation, the erudite Justice Fiberesima appreciated the role of FIDA for giving a platform for all stakeholders to get the knowledge of the law, appreciate it’s beauty and proffer methods of effective application in and from their perspectives.

The activity which rounded off with a break out session had representatives from each group , presenting action plans for sustainability of the network to enable smooth administration of the law.

A communique compiling activities from Tuesday the 15th September through today, was read by the Branch Chairperson Ngozi Odukwe Ighosevbe. 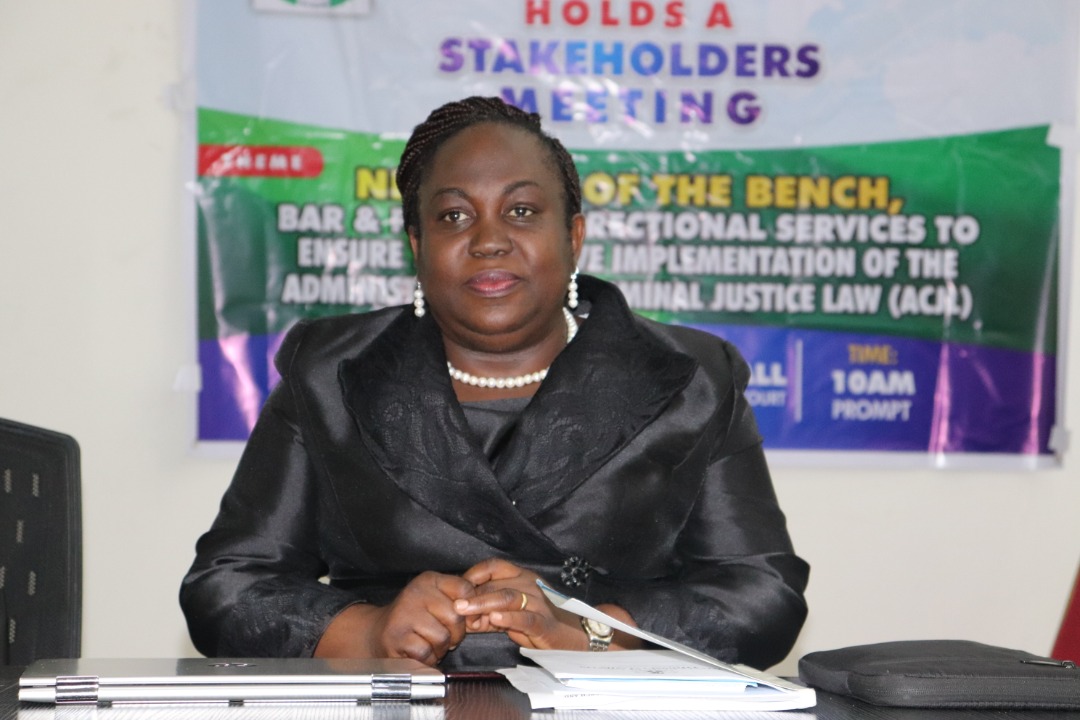 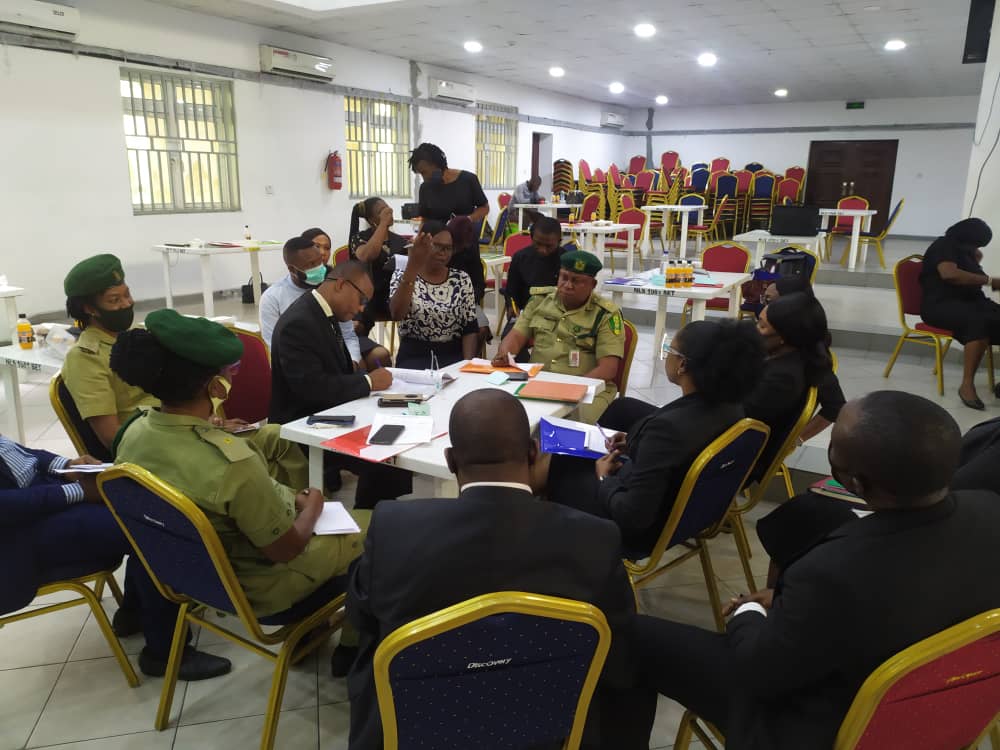 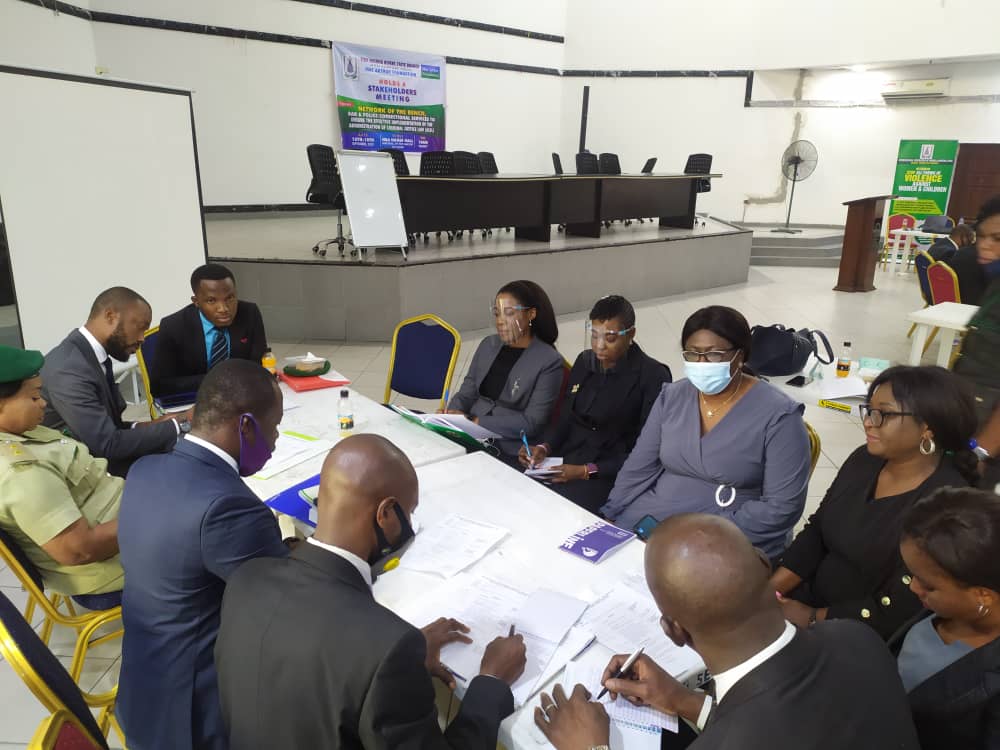 Participants for the day who are Magistrates from the State’s Magistracy, had the Director,  Rivers  State Legal Aid Council, Jane Frances Bianeyin taking them through some “key ” sections of the law that deals specifically with the Bench to ensure justice is served on parties especially Defendants who are victims of some peculiar circumstances.

Citing instances and sharing some of her experiences in the exercise of her duties \mandate in ensuring that justice is served,  Bianeyin, emphasized the need for periodic appraisal and meetings with stakeholders to shed some light on some of the provisions that is not in consonance with the Practice Direction to enable lawyers and litigants appreciate the beauty of the law.

Elucidating further, Frances Bianeyin summarized her concerns about the law as it relates to her line of duty thus;

Speedy dispensation of justice and decongestion of the Correctional Service Facilities, timeline in criminal proceedings, parole and non-custodial sentencing, plea and sentence bargaining, power and right of a Magistrate to pay supervisory visits to police stations within their jurisdiction and recording of witness evidence electronically in peculiar circumstances.

Citing and reading relevant sections of the law to get the message passed, Bianeyin engaged participants in an intellectual discuss that got brilliant suggestions for the smooth application of the law by all stakeholders in the interest of the general public.

The day’s session rounded off with a break out session wherein participants presented action plans to strengthen the implementation of the law in the State. 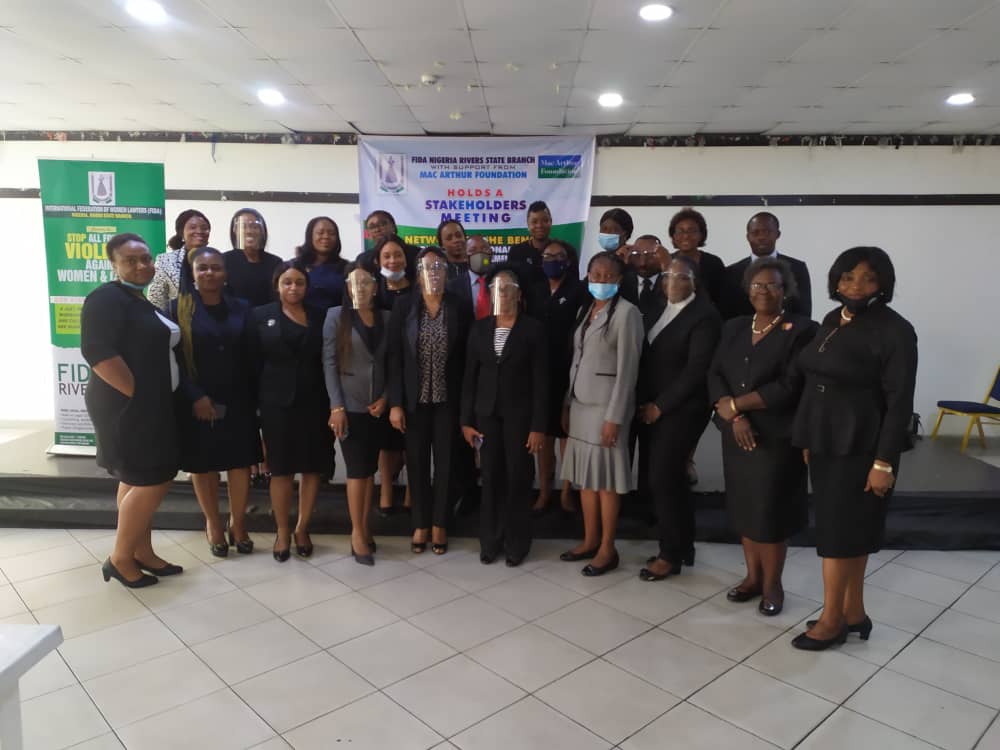 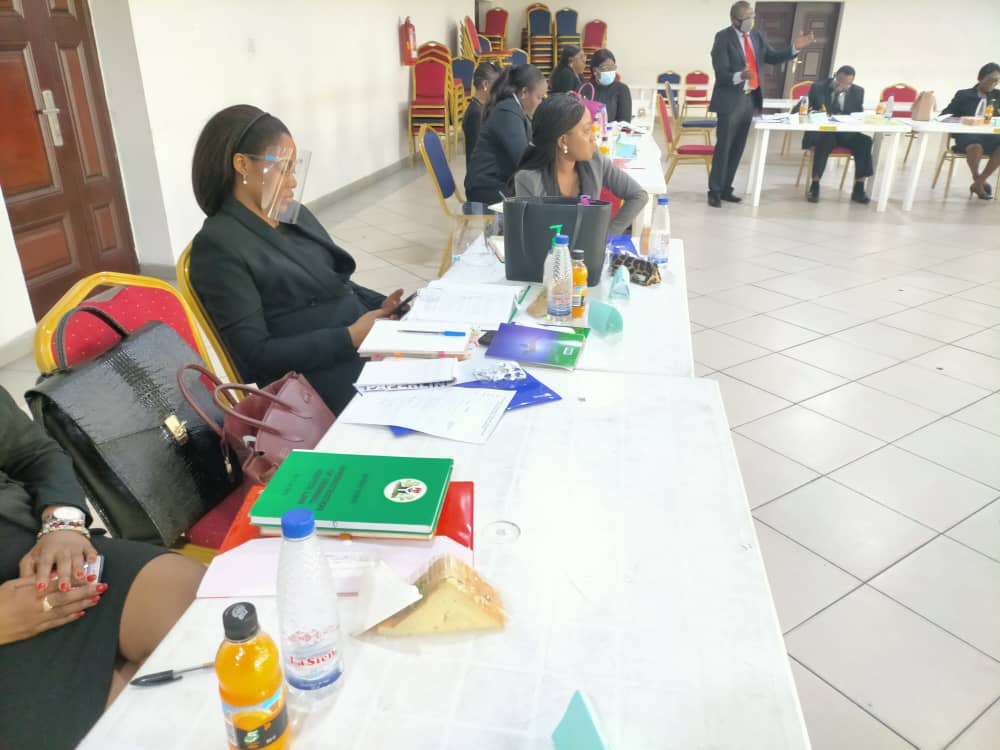 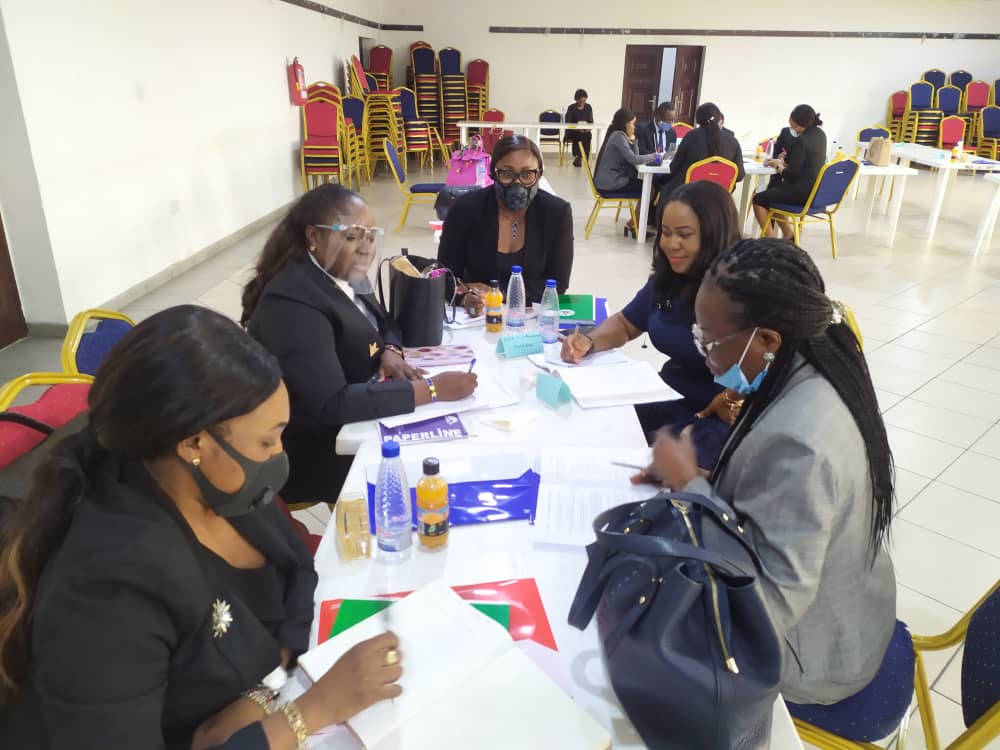 The activity, which commenced with the usual official formalities, had participants who are representatives from all Branches of the Bar in the State.

In her overview session, facilitator for the day, Evelyn Membere Asimiea commenced by tasking participants to share their expected outcome from the workshop. and took them through the innovations and respite the law has brought to stakeholders, victim, defendant and the society at large.

Further elucidating the beauty of the law, Membere Asimiea highlighted other innovations amongst others which includes but not limited to sections 7, 10, 174 sub 3, and 376 which deals with prohibition to arrest in lieu,  mandatory inventory taking,  right of a female person to secure bail and eight (8) days’ timeline for securing a legal advice from the office of the Director of Public Prosecution( DPP ) .

The workshop rounded off with a break out session wherein participants came up with suggestions on how all stakeholders can effectively implement the provisions of the law for the good of affected parties and the general public. 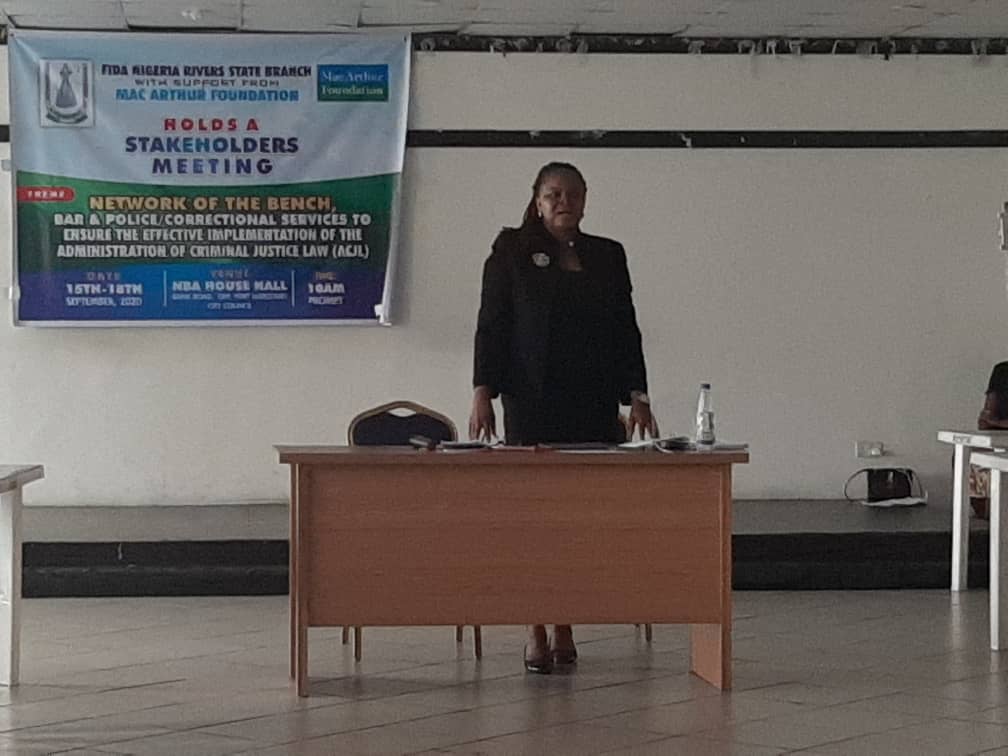 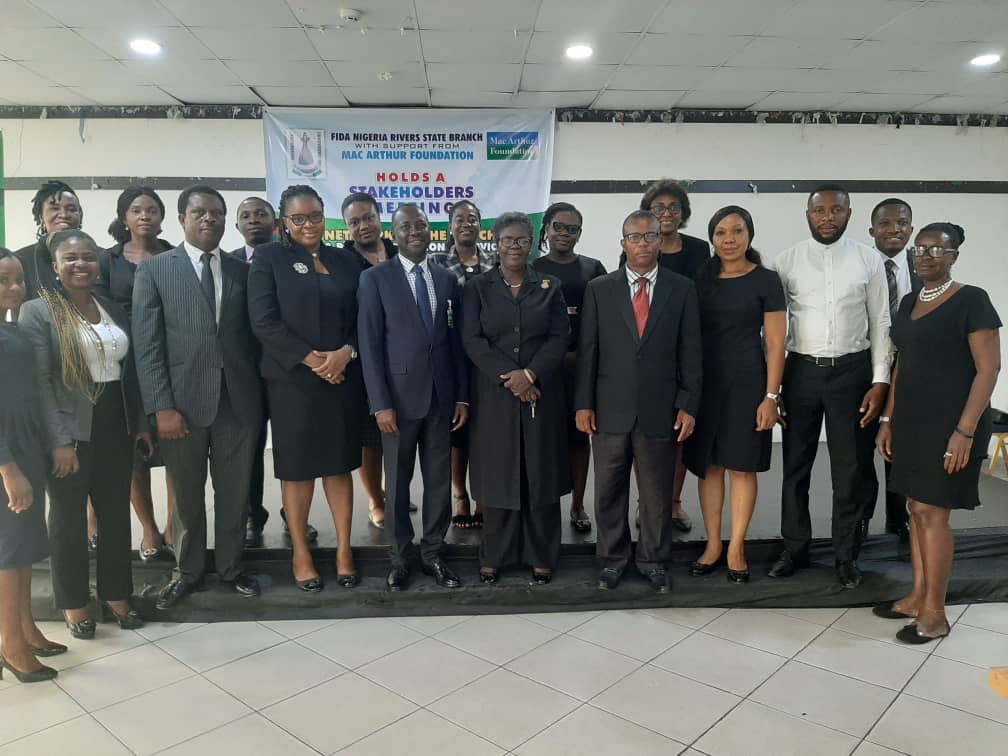 A Stakeholders meeting\workshop for the aforementioned, sponsored by the Mac Arthur foundation, commenced today the 15th day of September, 2020.

The event targeted at ensuring a smooth and effective implementation of the Administration of Criminal Justice law of Rivers State by the concerned stakeholders, had participants drawn from the Police and Correctional Services commencing the week long activity. which is proposed to train \sensitize relevant stakeholders directly dealing with persons in conflict with the law.

Chief Magistrate Ilaye Brown, the facilitator In her overview and in-depth analysis of the ACJL, gave an expose of the beauty and benefits of the provisions of the law. Amplifying the dignity of the human person as enshrined in Section 36 (1) of the 1999 constitution as amended which resonates with 33 sub 1 of the ACJL of the right of a defendant to make his or her statement in the presence of a lawyer.

Highlighting further on the provisions of the law, Chief Magistrate Brown enlightened participants on the situation and circumstances when a convict can be granted parole and the possibility and instances for non-custodial sentencing.

It was an interesting and educating session as participants interacted, exchanged ideas through breakout sessions that “birthed ” ways of working together to successfully and effectively implement the ACJL. 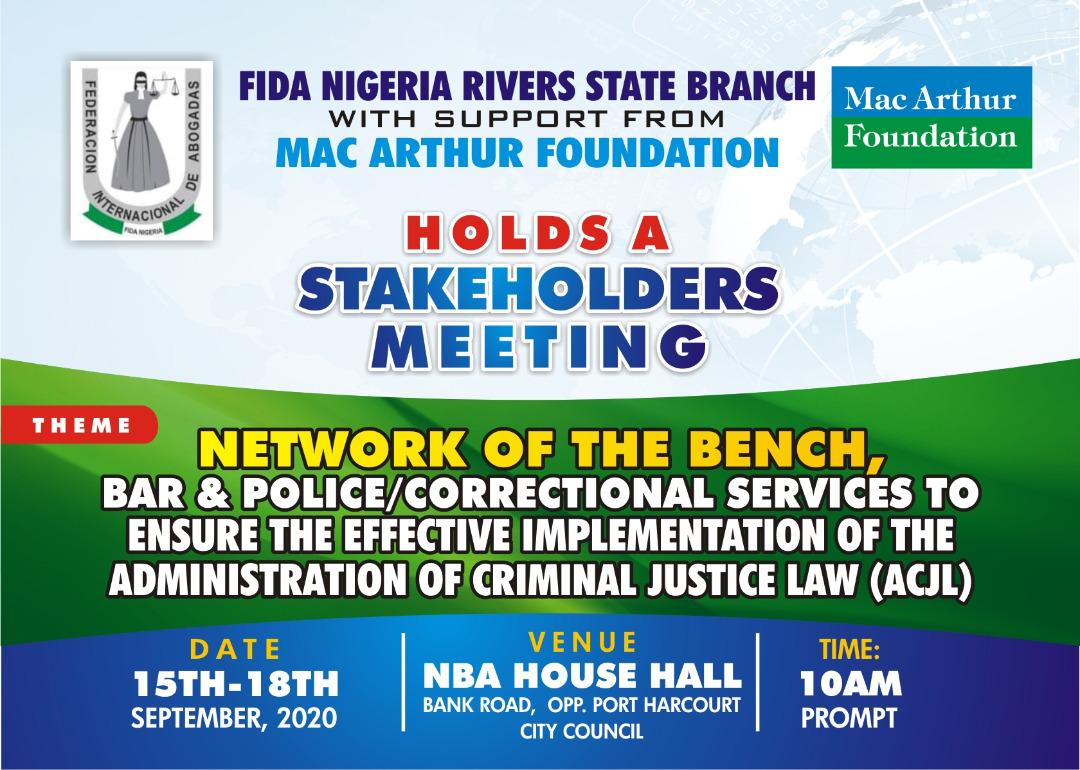 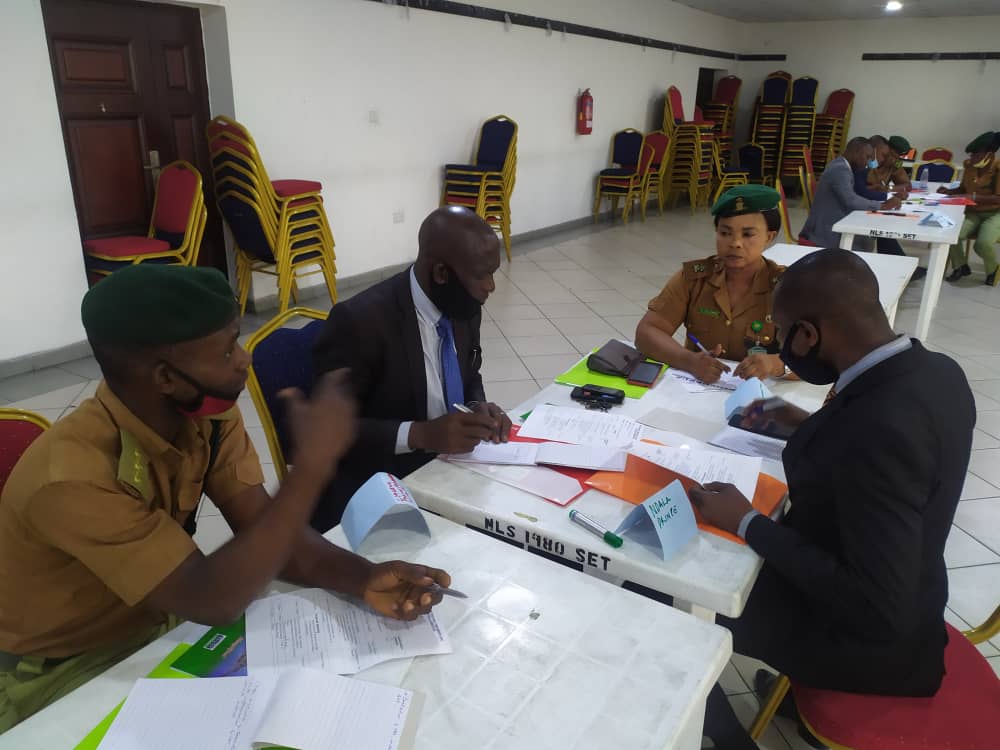 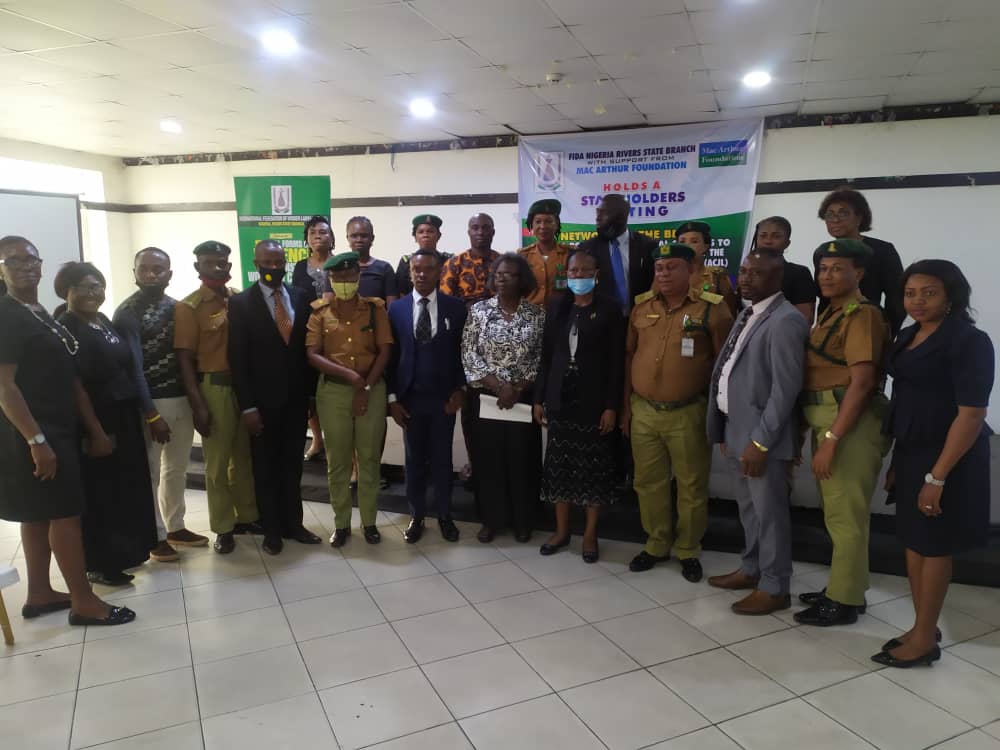 FIDA RIVERS in Commemorating International Day of the Girl Child on the 11th of October, was present to educate Girls on their Legal Rights, centered on the Theme ‘Empowering Girls for a Better Tomorrow’. The Program was organized by LEND A VOICE INTERNATIONAL FOUNDATION to celebrate the International Day of the Girl Child. In attendance were female students drawn from over 15 Schools in Ogale Eleme. 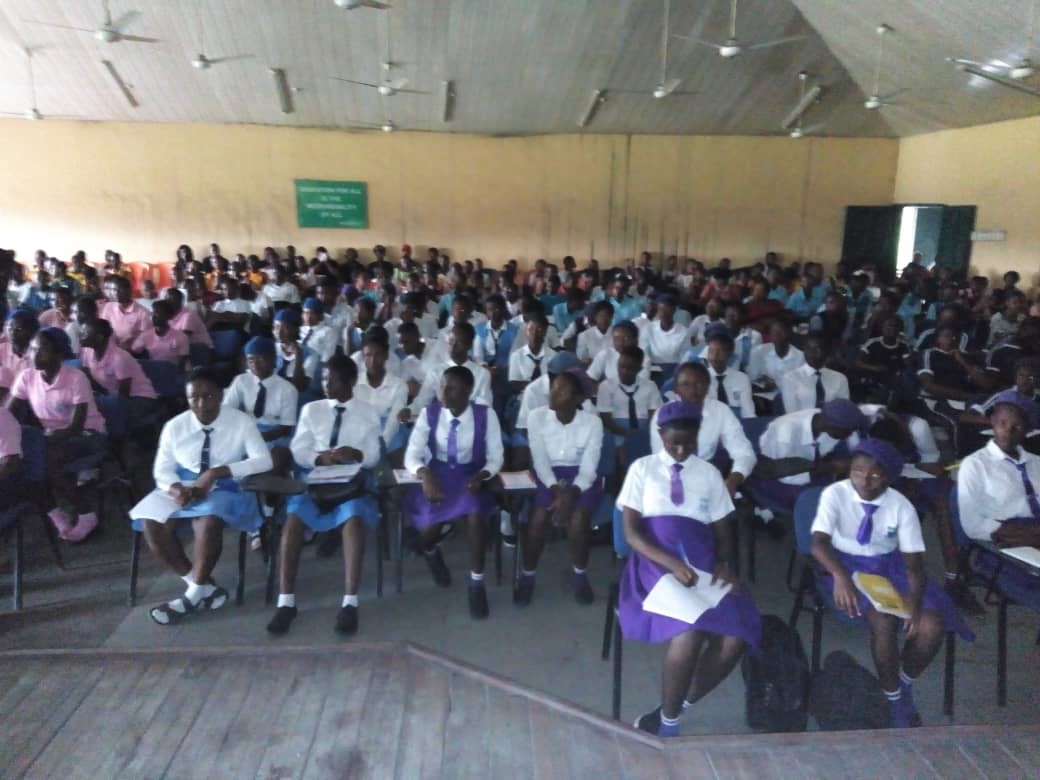 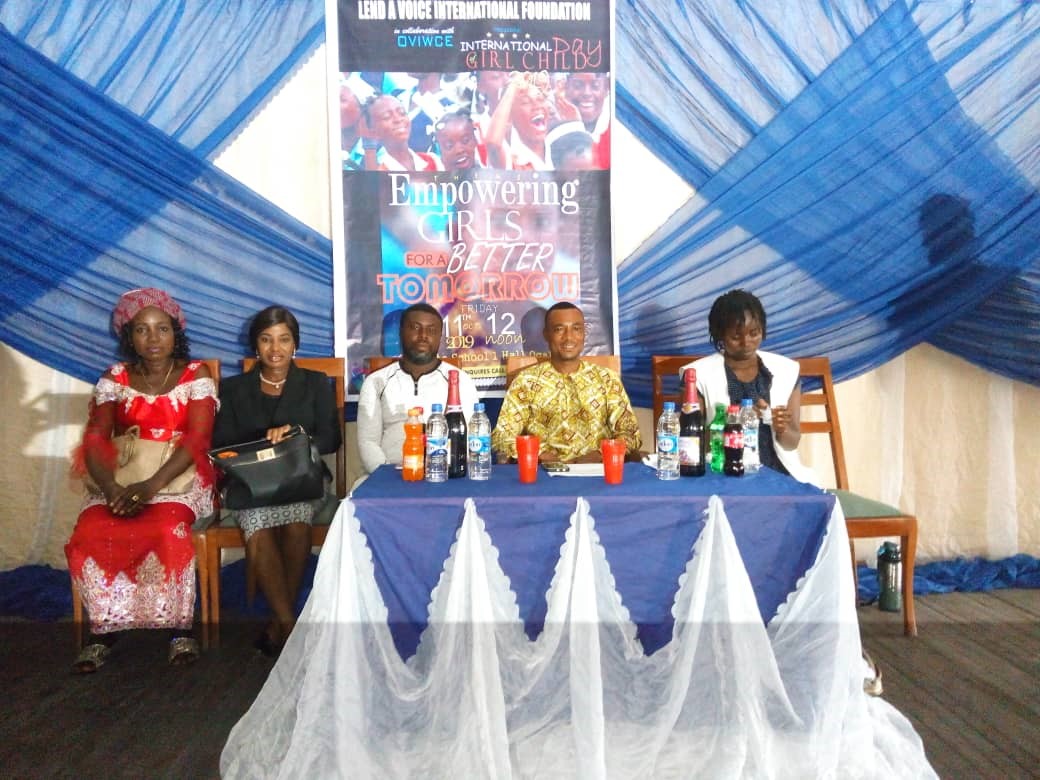 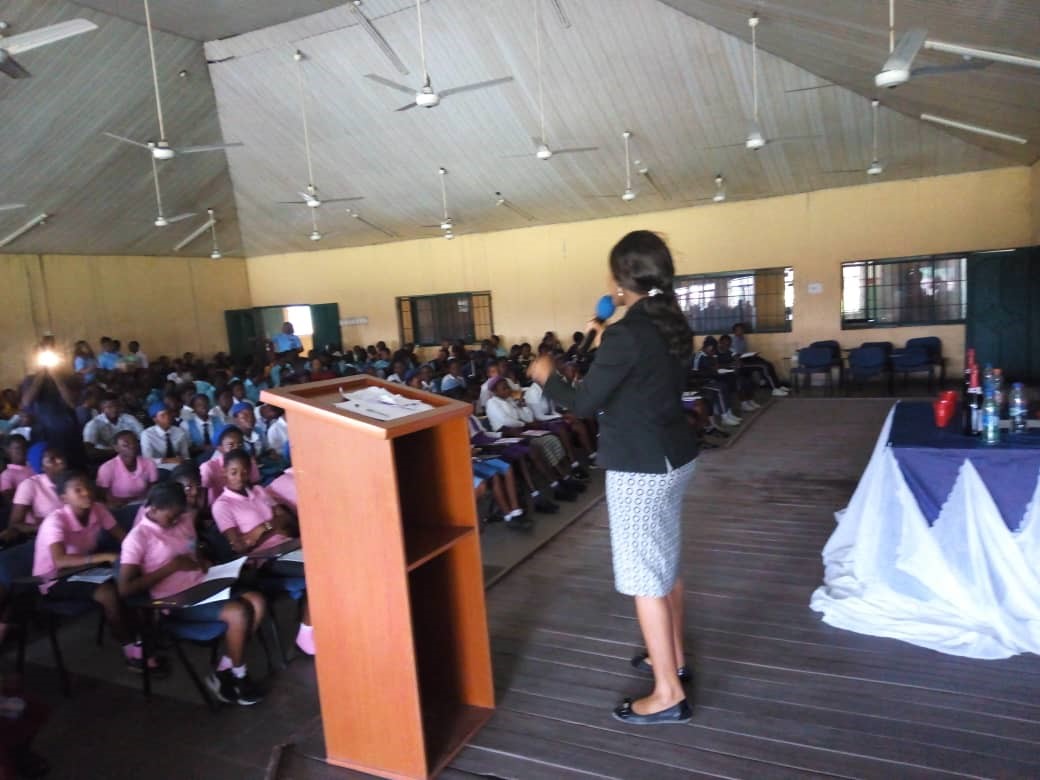 Influence on Rivers State Ministry of Social Welfare and Rehabilitation

The Association through its work on children and the vulnerable in the State influenced the transformation of the Social welfare department to a full – fledged Ministry in Rivers State under the name “Ministry of Social Welfare and Rehabilitation” with Hon. Mrs. Inime I. Chinwenwo Aguma, a past Chairperson of FIDA Rivers as the very first Commissioner in 2007.

FiDA Rivers in partnership with Centre for Development and Population Activities (CEDPA) empowered women from various Local Government area to participate effectively in leadership at different levels of governance through its programme on building grassroots democracy, formation of peer groups Increased participation in Community governance Voter education, advocacy and lobbying on genders issues etc. These programmes successfully yielded the nomination and fielding of a number of women as flag bearers in party elections as well as the actual election of women into the Rivers State House of Assembly and ward Councillorship positions.

We have through our print media reached out and mentored many women groups and individuals. Some of these publications include

The Scholarship scheme was launched in 1989 to assist disabled and indigent children in the State to achieve their reams in education and has been effectively administered till date. Presently we have 5 indigent children (2boys and 3girls) as beneficiaries of the scheme.

FIDA Rivers renders humanitarian services to inmates of the Remand Home, Old People’s Home, Special School for the Handicapped, Children’s Home and other Orphanages and Homes in Rivers State. We also offer Career Guidance and Counselling Services, Seminars, Life Skills Training for Primary and Post Primary Students in the State. We have also empowered women with monetary grants to start off small scale business in the State. The most recent was the economic empowerment with monetary grants ranging from 30,000 (Thirty Thousand Naira) to 100,000 (One Hundred Thousand Naira)of 30 women in celebration of our 30th anniversary in 2017.

FIDA Rivers in recognition of the necessity to garner critical mass support and partnership in pursuit of the accomplishment of its set objective developed the strategy of engaging partners from all sectors of the State like Government Agencies, Non Governmental Organizations, Community Based Organizations, Security Agencies, Civil Society groups like the Medical Women association of Nigeria, Rivers State Branch,

b. Violence against Women &Children

i. Reproductive Health Rights of Women

k. Types of Marriages in Nigeria 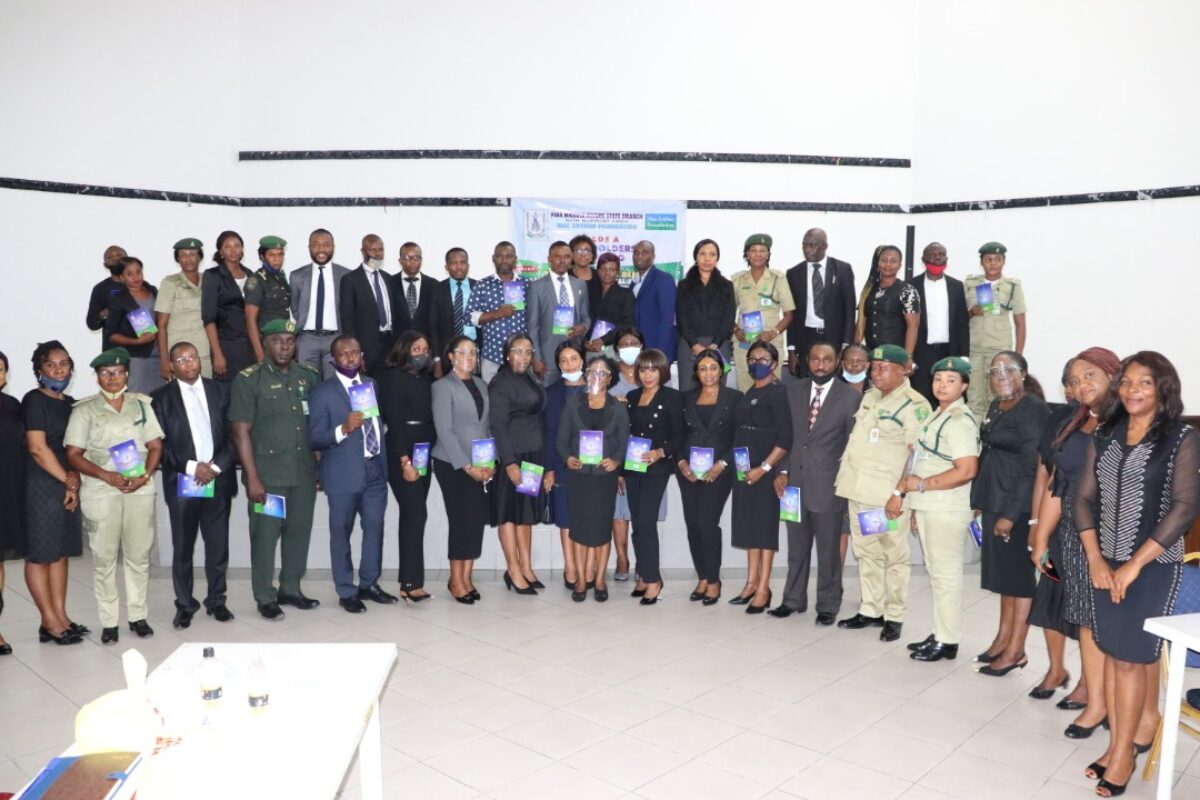 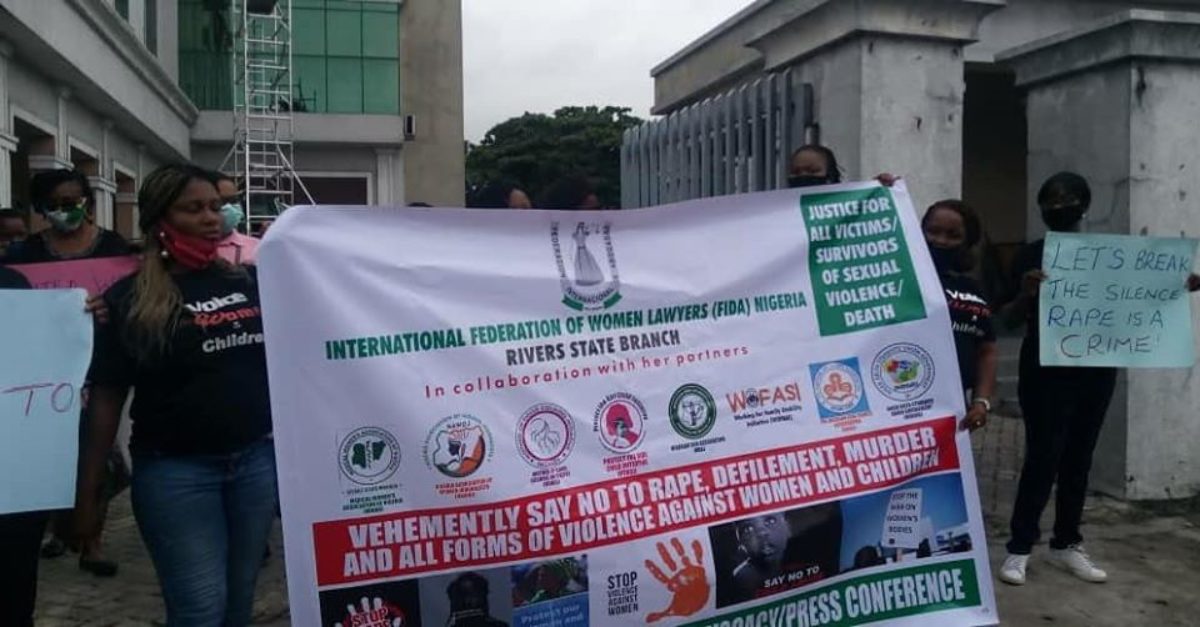 FIDA Rivers organized a press conference\walk on Zero tolerance for Rape, defilement and other forms of abuse\violence against women and children. Also... 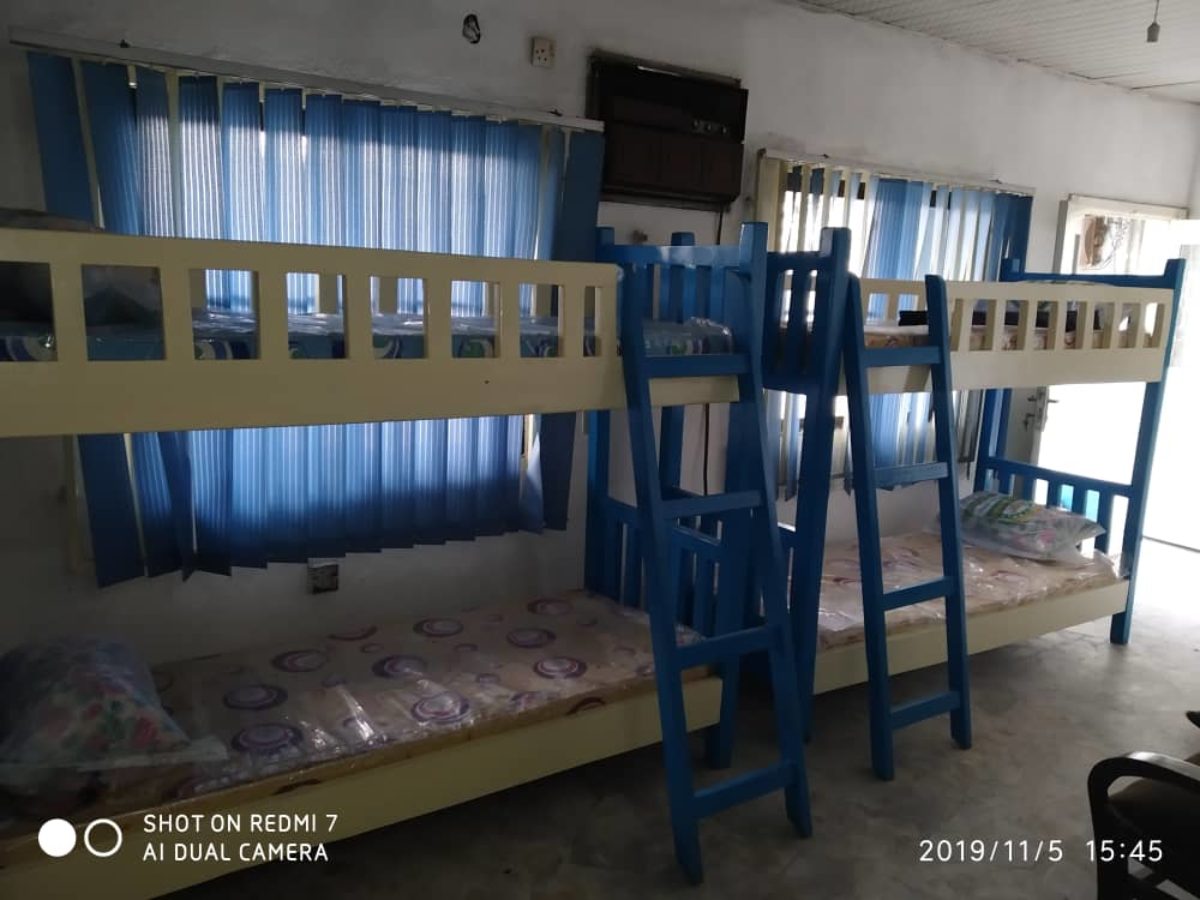 Her Excellency the deputy Governor Dame Dr. Ipalibo Harry Banigo graciously provided FIDA Rivers a Safe Haven that will serve as a temporary shelter for... 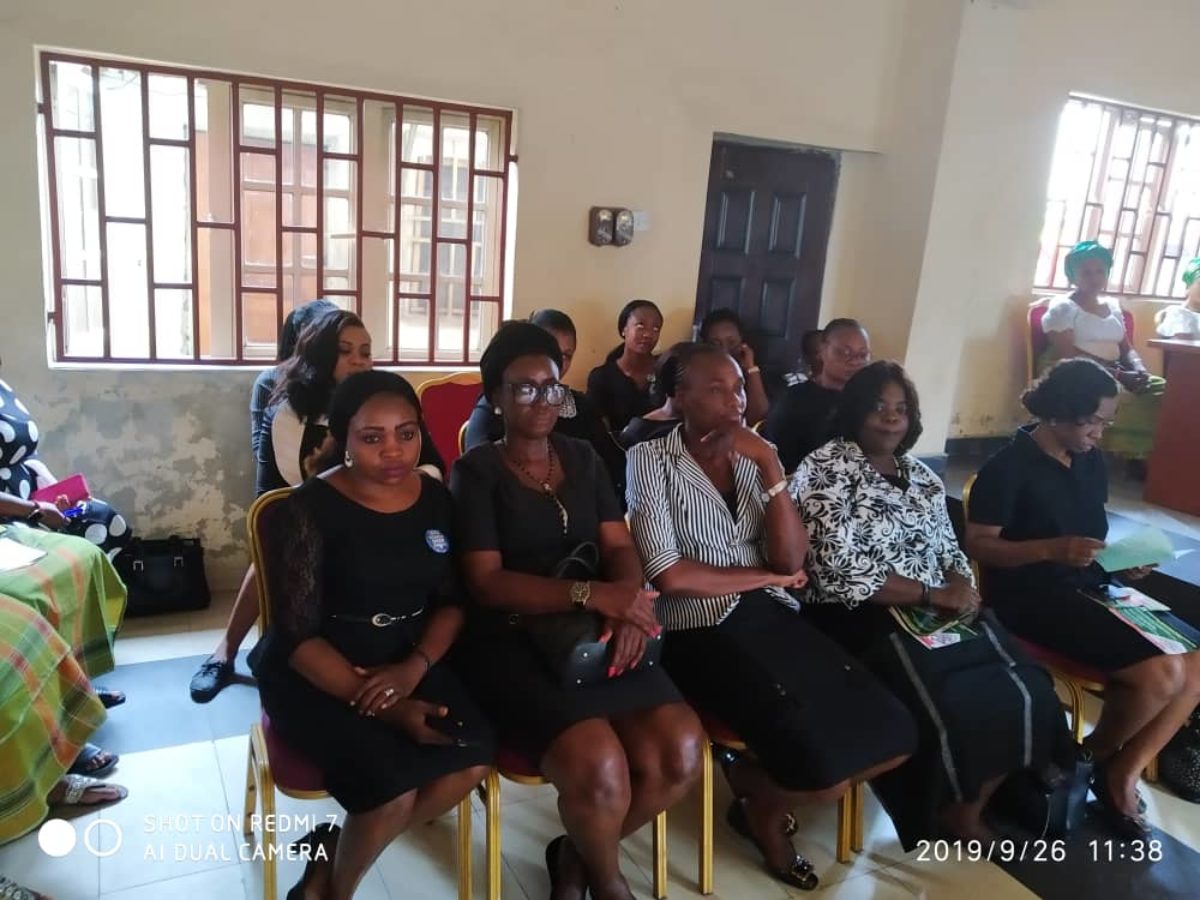 Rumuokrushi Community played Host to FIDA Rivers on Thursday the 26th September 2019. The delegation led by the Chairperson Pst. Ngozi... 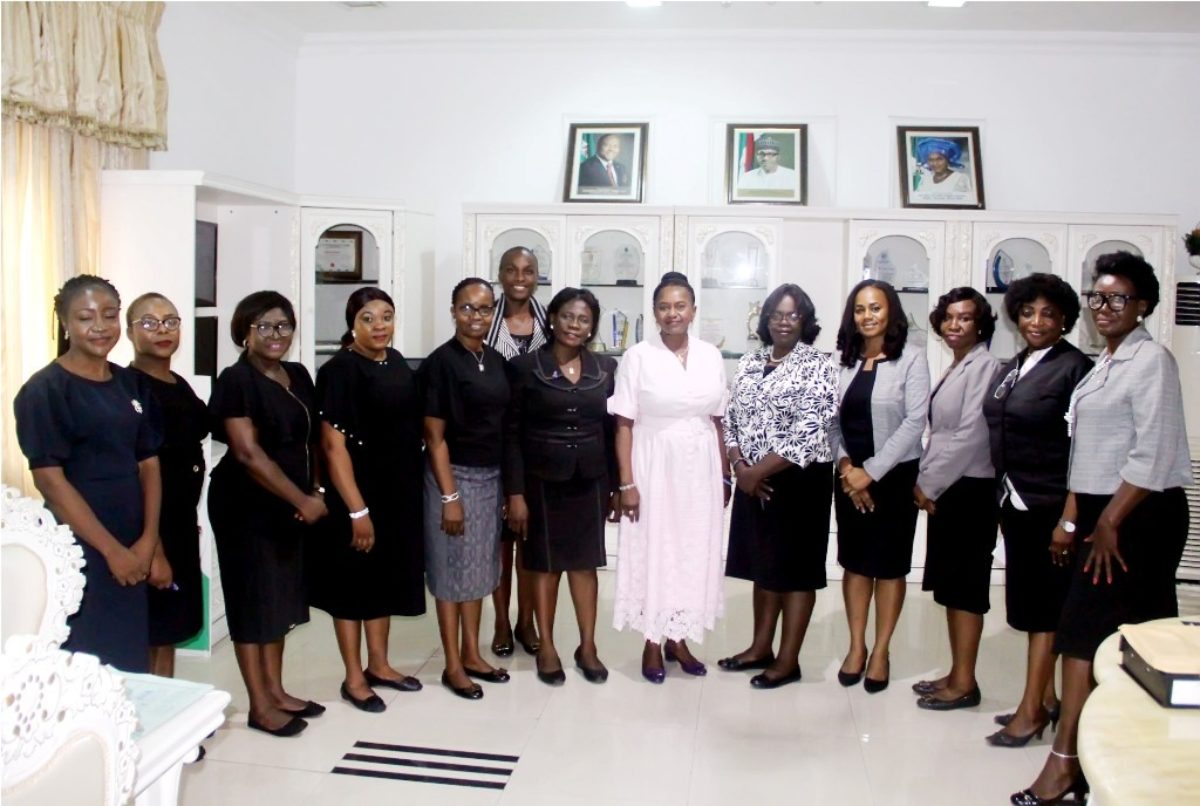 Shelter for The Vulnerable